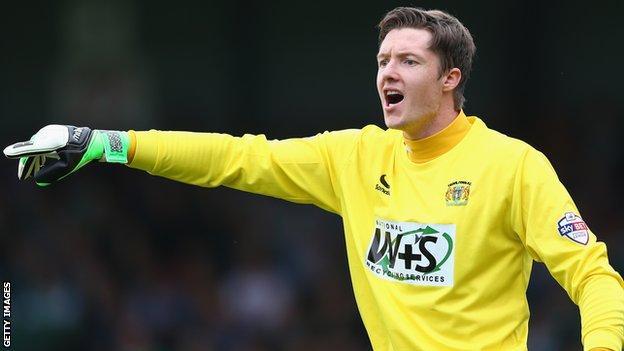 Yeovil dropped to the bottom of the Championship league table after a goalless draw against Brighton.

The visitors created the best early chances but Ashley Barnes shot over from close range and Will Buckley missed the target when well placed.

Yeovil had a late opportunity to score a winner but Shane Duffy headed an Ed Upson corner narrowly over the crossbar.

The Glovers have now failed to win in 11 Championship matches.

Yeovil, competing in the second tier of English football for the first season, won their opening game at this level, 1-0 at Millwall on 3 August, but have not won a league match since.

They were indebted to goalkeeper Wayne Hennessey as he blocked Barnes's powerful header and saved a powerful effort from Upson as both sides struggled to hit the target.

Midfielder Fraser Fyvie was making his Yeovil debut after joining on a loan deal until 1 January from fellow championship Club Wigan, but his day ended in disappointment as he had to be substituted after suffering a shoulder injury.

Yeovil have only scored six goals from their 12 league matches, the worst goalscoring record in the Football League, and drop to 24th in the table after Barnsley, who had been bottom, defeated Middlesbrough 3-2.

Brighton, who lost in the 2012-13 Championship play-offs, are now in 14th position, eight points behind sixth-placed Reading.

"I don't think either side deserved to lose. It was a cagey game, but when you come up against a team like Brighton, who were only one or two games away from the Premier League last year, then you mustn't be too disappointed with a point.

"We may have gone bottom of the league, but we're gaining experience against these types of teams who keep the ball and are clever.

"It's a bit early to be worrying about league position, but we've got to gradually push our way out of the bottom three."

"We were a little disappointed as we felt we did enough to win the game. We had enough possession and enough chances.

"Anyone who has watched us for the last two months have seen that we create enough chances, but we've got players like Craig Mackail-Smith and Will Hoskins out injured.

"We're missing that goalscorer to win us games."