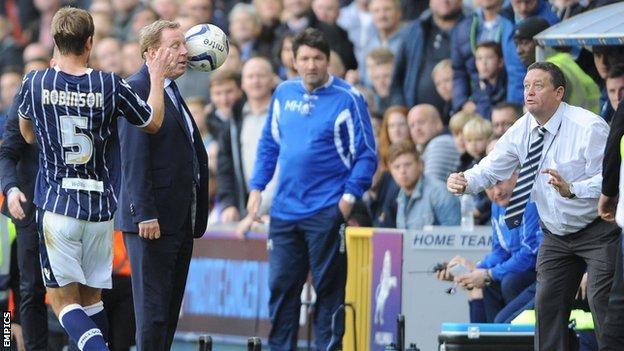 Niko Kranjcar put the visitors ahead when he fired in immediately after the home side were denied a penalty.

However, in the third minute of added time, Easter worked his way into the area and lashed in a shot.

The visitors had only conceded two goals in their previous 10 league games, but their late lapse left them two points behind Championship leaders Burnley, who have played a game more.

R's boss Harry Redknapp's mood was not helped when the ball was thrown at his face during the match, as pictured above.

Kranjcar was a key player for Rangers and he went close early on when his shot hit the post.

Millwall felt they should have had a penalty for an Austin foul on Liam Trotter, but QPR went up the other end and scored through Kranjcar.

The Lions twice went close before equalising shortly after the break when Trotter dispossessed Richard Dunne and cut the ball back for McDonald to slot in.

But Kranjcar set up Austin to score his sixth goal in as many games to put the visitors back in front before Easter's late intervention denied them victory.

"I thought it was no more than the lads deserved, considering the quality that QPR have.

"We hung in there and got a fine result. To come from behind twice is credit to the lads."

"I thought we should have won the game. From a possession point of view we controlled the game.