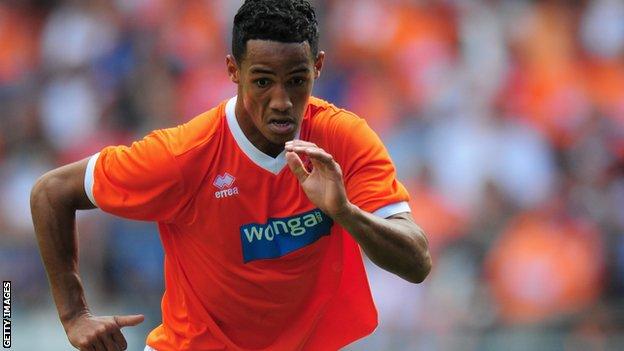 Tom Ince's penalty sealed three points for Blackpool on the day his manager and father, Paul, served the first match of a five-game stadium ban.

Wigan's Grant Holt and Thomas Rogne both had second-half headers which hit the bar within a minute of each other.

The Latics' James McClean was shown a straight red card in stoppage time.

A clash between winger McClean and Blackpool defender Gary Mackenzie was brought to the attention of referee Mark Haywood by his assistant, after it appeared McClean had been stamped on.

With Paul Ince banned from the stadium, his assistant Alex Rae and former caretaker boss Steve Thompson took charge of the Seasiders - though the manager's presence was felt, with a local newspaper handing out 10,000 masks of his face.

The last time the teams played each other was in the Premier League, Wigan sending Blackpool into the relegation zone by winning 3-1 in April 2011

The Football Association had given the Blackpool manager a five-match ban, ruling that he threatened to "knock out" an official after their 2-1 win at Bournemouth in September.

After winning five of the their first six league matches to sit top of the Championship, Blackpool's form has slipped away, with a loss and four successive draws.

On-loan Manchester United forward Nick Powell missed Wigan's best chance of the first half, heading wide at the back post after Rogne flicked back.

Blackpool kept up the pressure after the break, with Ricardo Fuller creating an opportunity for himself, only for his shot to be blocked by Callum McManaman.

McClean headed wide at the back post from Emmerson Boyce's cross, before Boyce missed his team's best chance as his follow-up shot was cleared off the line after Rogne's thumping header.

Substitute Holt hit the bar with another header a minute later, then Leon Barnett's snapshot was stopped by Matt Gilks's legs in the dying minutes.

At the other end, Carson kept out two shots from Ince, another from Steve Davies, and a point-blank Kirk Broadfoot header in a breakneck final five minutes.

Blackpool are now unbeaten in 10 games at Bloomfield Road.

"The lads proved their worth and showed what characters they are.

"We'd done the hard work on Friday - we'd gone through how they play and the video analysis - but it's not ideal when your manager isn't here.

"We've watched the penalty decision again and the referee has called it right. It was a penalty and it was a good decision."

"I'm astounded by the decision to send off James McClean.

"For Gary Mackenzie to stand on James McClean while he's laying on the ground - and then for James to get up and not touch him but get James sent off is hard to take.

"We've had it a few times on the road this season when decisions like that have gone against us and we'll definitely be appealing against that decision."