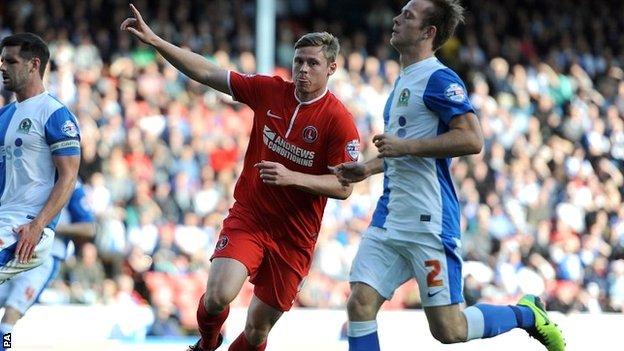 Simon Church's volley earned Charlton their first away win in the Championship as they beat Blackburn.

The Wales international scored the winner against Macedonia last Friday and made the difference as the Addicks avoided making their worst start to a campaign in more than seven years.

But Rovers were condemned to a second straight loss.

Charlton's second consecutive win at Ewood Park, and a first victory in seven attempts, moves them two points clear of the bottom three.

The visitors had scored only once in their previous four games prior to this match and ended that run when Dale Stephens's chipped pass found Church, who controlled with his chest before slotting past Jake Kean with a controlled side-foot volley.

Charlton were indebted to Hamer when he produced a brilliant fingertip save to deny Rhodes' volley, which was heading for the top corner.

Gary Bowyer's Blackburn side began to apply more pressure as the half wore on. Having scored 10 goals in five home games before Saturday, they thought they had an 11th on the hour.

Tom Cairney's corner was cleared as far as Lowe, who controlled before unleashing a brilliant volley that deflected just wide of the right post with Hamer scrambling.

But Church could - and maybe should - have had a second moments later when the forward met Bradley Pritchard's drilled cross but his bullet header went straight into the grateful arms of Jake Kean.

Blackburn pegged the visitors back but, despite six minutes of stoppage-time ensuring a tense finish, the visitors held on.

"We've seen the goal again. I'm not sure on which part of the arm it hits him but it's quite clear it's handball.

"Credit has to go to Charlton for the amount of bodies they got behind the ball but it's up to us to be a little bit cuter.

"There was plenty of endeavour and workmanlike performances but we needed more care in the final third."

"Goalscorers and strikers want to be out there and I just felt [Cox] would add that for us. I'm really pleased for him.

"We've analysed all the games and felt we needed to get back to basics a little bit because you can't just go out there and think you're going to win any game. You have to earn the right.

"It won't always be easy on the eye, even though at times it was from both teams. You have to change accordingly and we certainly did that towards the end of the game."