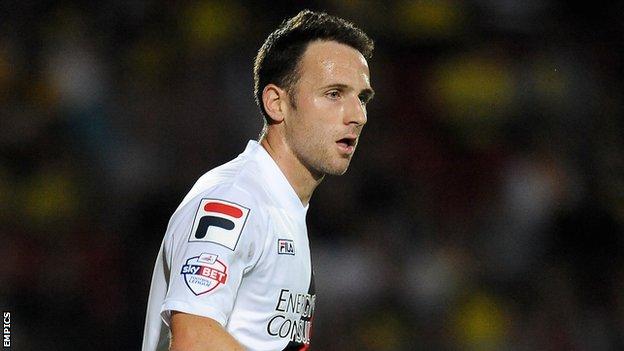 Henri Lansbury opened the scoring for Forest seven minutes before half-time with a spectacular 30-yard drive.

But Darius Henderson, who had an effort disallowed, and Simon Cox both wasted chances to kill the game for the hosts.

And in the first minute of added time, Tokelo Rantie set up Pugh, who found the corner from just outside the area to snatch a point for the Cherries.

Lansbury and Cox passed up early chances to open the score for Forest, whose manager Billy Davies was handed a four-year contract extension on Friday.

Djamel Abdoun's effort was saved well by Bournemouth's on-loan West Ham keeper Stephen Henderson, who was then stretchered off after only 13 minutes with what appeared to be a shoulder injury.

But Lansbury found the top corner from long range to put Billy Davies' side ahead at the break, with Bournemouth top scorer Lewis Grabban hitting the post in first-half added time.

In the second half, Cox was denied by substitute keeper Ryan Allsop, while Forest striker Henderson failed to hit the target after beating the offside trap.

When Henderson did find the net with a header, the effort was ruled out for a push by referee Phil Gibbs.

With time running out, Pugh squeezed in his third goal of the season past Forest goalkeeper Karl Darlow, who had earlier twice denied South Africa striker Rantie.

It meant Bournemouth kept up their record of scoring in every league game this term.

"We are very frustrated. We had so many chances, I think there were 20 overall, but the opposition worked hard and credit to them.

"I am confident these strikers can get the goals. The lesson is to be clinical."

"I am proud, we did not underestimate Forest. The way they play is excellent, they are a good side and for us to get anything here will hopefully be a big moment for us.

"They did not take their chances, but we were able to take ours.

"We are a good side, we are adapting to this level. We can take huge confidence from this."