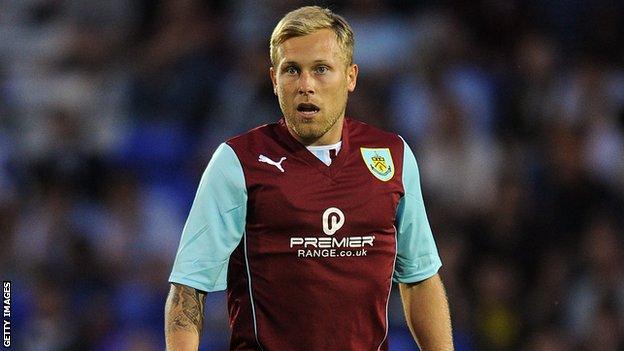 Burnley extended their lead at the top of the Championship as Scott Arfield's header earned victory at Ipswich.

Ipswich were denied a half-time lead when Trippier cleared off the line from Cole Skuse's half-volley.

For Burnley, Michael Kightly's 20-yard shot was stopped by Scott Loach before Arfield struck to take the Clarets two points clear of QPR.

Sean Dyche's side have won nine of their opening 12 Championship matches - their best start to a season since 1897, when they gained 10 victories from their first 12 Division Two games.

In the early stages, Burnley captain Jason Shackell made a decent early block after David McGoldrick had been teed up by Daryl Murphy's header, while Ipswich keeper Dean Gerken was forced off injured six minutes before half-time, to be replaced by Loach.

The home side continued to create chances at the other end, though, with Paul Anderson heading wide after Trippier sliced a clearance high into the air.

Burnley's right-back was involved again two minutes before half-time, when keeper Tom Heaton flapped at a looping Luke Hyam cross, but Skuse was denied a first goal for Ipswich when Trippier cleared his half-volley off the line.

Skuse then hit a 25-yard shot just wide after picking up Ryan Tunnicliffe's low pass inside.

Vokes tumbled over with Luke Chambers nearby, but was judged to have tripped over his own feet, while Cresswell's goal-bound shot was deflected by Shackell with Ipswich's players appealing in vain for handball.

Anderson's 20-yard shot for the home side fizzed just wide, while Kightly's effort from a similar distance tested Loach at the other end.

But with the game edging towards a draw, David Jones fed Trippier on the right-hand side and his low cross was headed into the far corner by Arfield.

"I don't think Burnley were any more accomplished than us, but they had a Johnny-on-the-spot who came in and scored.

"We got what we deserved as they defended their goal better than us for the 90 minutes.

"I was delighted with how we played against a very good side but are they better than us? I don't think so."

"It is all about small margins. They had the better of the first half but we had a solid framework, did the basics, and were solid enough not to concede.

"The second half levelled out, although there were pockets of good play. I was thinking it was going to be a 0-0, and then a fine moment of quality saw a good cross and a good header."