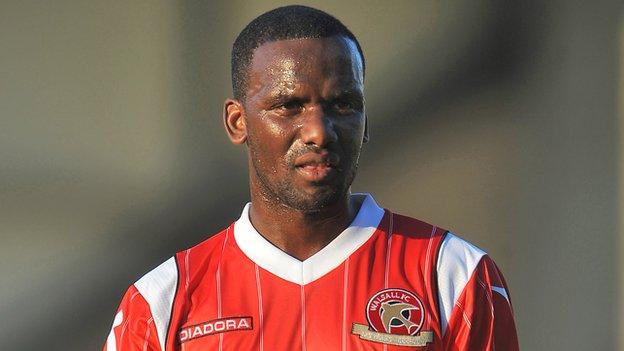 Walsall pulled off their first home win since the opening day of the season to beat Stevenage at the Banks's Stadium.

James Baxendale then released Craig Westcarr after the restart to make it 2-0, hammering a low left-footed shot for his seventh goal of the season.

Francois Zoko pulled one back on 72 minutes when keeper Richard O'Donnell dropped Luke Freeman's cross, but Boro then had Lucas Akins sent off late on.

The Stevenage striker received his marching orders in the 80th minute for punching Saddlers defender Paul Downing after the ball had gone, referee Andy Madley producing the red card after consulting with his fourth official.

"Several of the lads were very unwell. When food poisoning hits your camp, it's difficult.

"Take nothing away from the opposition, they worked hard for the points. We were way short in the first half and I think it's understandable with the level of sickness we have had in the side.

On Akins' red card: "There was an arm to the body when he was trying to break free from a headlock.

"I think he [the fourth official] got the needle because I threw a ball on the pitch, and the next minute I'm having a player sent off and no one else had seen the incident."