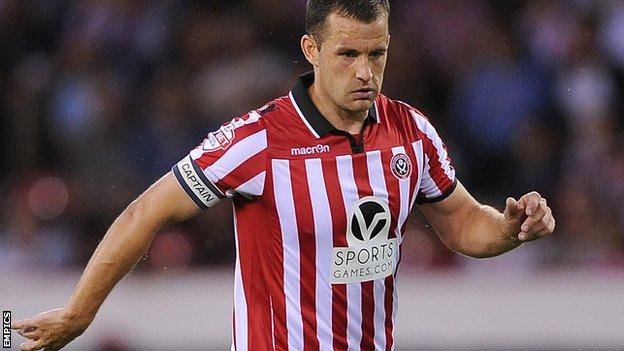 Sheffield United secured their first win since the opening weekend of the season by beating 10-man Port Vale.

Vale endured a nightmare start when, after Neill Collins had headed the Blades ahead, Daniel Jones was sent off for a second bookable offence.

The visitors levelled in fortuitous circumstances just before the break when Adam Yates' cross crept in.

However, Michael Doyle hit the winner when he powered the ball beyond the outstretched arm of keeper Chris Neal.

Having started the day bottom of League One, the Blades' first win in 11 matches, for caretaker boss Chris Morgan, was enough to lift them out of the tightly-congested relegation zone.

It proved to be an unhappy return to Bramall Lane for Vale manager Micky Adams, who was on United's books as a youngster and had a short, unsuccessful stint as Blades boss two years ago.

He was also involved in a touchline row with Jennison Myrie-Williams when the forward was substituted on 26 minutes during the reshuffle following Jones' dismissal.