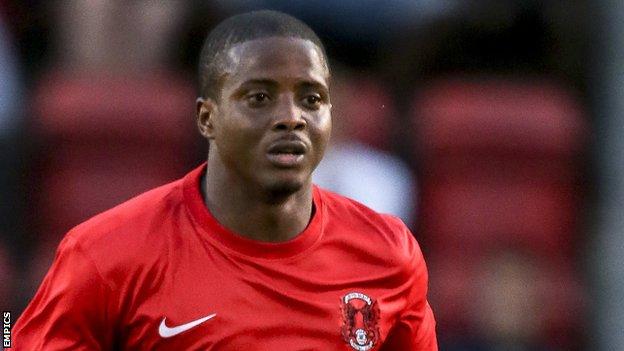 Kevin Lisbie scored twice as Leyton Orient maintained their lead at the top of League One with a win at Tranmere.

The 35-year-old striker converted Lloyd James's cross and then turned in Dean Cox's shot to make it 2-0.

Lisbie was then involved in a clash that led to home defender Ian Goodison being sent off for violent conduct.

David Mooney failed to score the resulting penalty, but Cox and Shaun Batt both fired in from the edge of the box to complete Tranmere's misery.

Orient's closest challengers, Peterborough, also won on Saturday to stay within a point of the leaders.

The Londoners remain the only unbeaten side in the division, a record they kept thanks to Lisbie's brace which takes his goal tally this term to 11 from 14 appearances.

Tranmere have taken just two points from six home games this season, conceding 17 goals in the process, and have not won a league fixture at Prenton Park since 24 March.

They almost levelled towards the end of the first half, but visiting goalkeeper Jamie Jones pushed Ash Taylor's header onto a post, while Orient's Mathieu Baudry was also denied by the woodwork with the score at 1-0.

"The way we collapsed was embarrassing. There was nothing in the game in the first half. We were a bit unlucky to be 2-0 down, and then 'Goody' does something stupid that's let everybody down.

"It was a bad tackle and they've had a little get-together, but you can't do what he's done.

"It's been on the cards for a couple of weeks because he got away with it at Bradford, where I thought he shouldn't have been sent off, but he was involved.

"Referees aren't stupid and they're going to look for it. You can't stand up and slap someone in the face."

"Particularly in the second half, I felt we went up into our top gear and we were more like ourselves, and the pleasing thing was we continued to create chances all afternoon.

"Kevin Lisbie was excellent today and he could have had more. He didn't take the penalty for his hat-trick but it doesn't matter who scores, as long as we keep creating and scoring.

"It was pleasing to win away from home, but to also keep a clean sheet was a great effort. We have not had a great record here over the years so it was a great result."