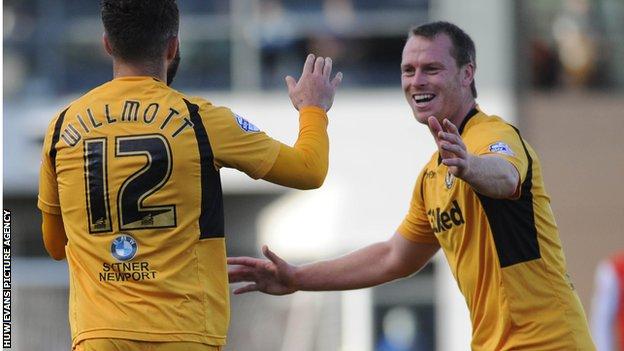 Newport County got back to winning ways in League Two with a comfortable home win over York City.

Top-scorer Chris Zebroski set Newport on their way with a tap-in after Conor Washington's shot was blocked.

York pressed for an equaliser but Lee Minshull doubled Newport's lead with a right footed curler before half-time.

Danny Crow was left unmarked at the far post to score Newport's third goal with with a minute left following Robbie Willmott's free-kick.

"We've had a response we would have like after last week and I thought we were fully value for our win today.

"We had a point to prove to ourselves and we did that and even the lads who get left out, when they came on, played a very big role in seeing the game through and making it a very good score line.

"They answered all the critics and the questions about them today and I'm absolutely delighted for them."

"I don't think we played as well as we can do or have done. We huffed and puffed a bit.

"The endeavour by the players - I can't question that at all. But we are disappointed with the three goals, so it's 'feet firmly back on the ground'.

"We've got another big game on Tuesday night and we've got to get ready for that."