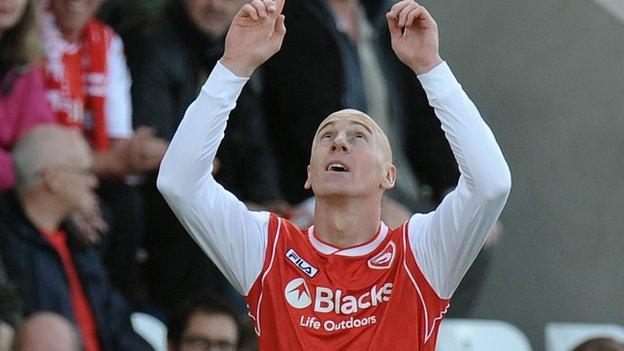 Morecambe missed out on the chance to go top of the League Two table after being held to a draw by Wimbledon.

Kevin Ellison gave the hosts an early lead when he fired a left-footed shot from the edge of the box into the top right-hand corner.

Wimbledon grabbed their equaliser when George Porter's cross was nodded home at the far post by Michael Smith.

"You're not always going to have a thriller like Chesterfield. It was a poor game.

"We started quite brightly and scored a good goal, but a draw was a fair result.

"There weren't many chances for either side. They frustrated us and fair play to them for that. They got their tactics right."

"I think after a spell of a point from nine games, especially against some teams who were down there and struggling, you can't come in gung-ho against a team unbeaten in eight.

"We had to come up with a game plan and implement it and we did which was very pleasing.

"It was a good level of performance. We limited them to few chances and, after going a goal down, we fought back well and we could have even nicked one late on.

"We are not a top-four or possibly top-six side but we are going to be there or thereabouts. It's a big improvement on where we were last season."