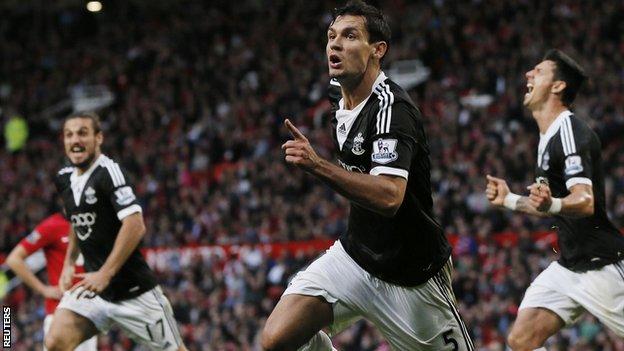 Captain Adam Lallana tapped in from a yard out with only a minute of normal time remaining to give the visitors a share of the spoils and leave United eight points behind Premier League leaders Arsenal.

The champions had looked on course for what would have been a ninth successive win over the Saints. Teenager Adnan Januzaj produced another moment of brilliance to set Robin van Persie on his way to put United in front midway through the first half.

The hosts might have put the game beyond Southampton as both Van Persie and the excellent Wayne Rooney hit the crossbar.

However Mauricio Pochettino's side will feel their dominance of possession more than warranted a point, even if they lacked a genuine cutting edge for long periods.

For United, there had been signs that they were beginning to turn the corner after the club's worst start to a Premier League season.

The movement and understanding between Rooney, Van Persie and Januzaj bordered on the telepathic. Even as Moyes's side were forced back for long periods of this game, the trio ensured this was a United side that bristled with attacking menace for all 90 minutes.

"This is the third time I've watched Southampton this season and I've been impressed every time.

"In the first 20 minutes they created opportunities and chances. They took the game to Manchester United, but United then scored and were comfortable.

"But Southampton pushed bodies forward, got a late goal and for their effort and commitment they will think they deserve it.

"David Moyes has taken over an almost impossible job, and you have to give him time to build his own team.

"The problem he will have is expectations - United are a top team. He will have to deal with it, and there will be a bit of pressure on him."

Januzaj, 18, who signed a five-year contract before the game, once again displayed signs of his immense talent with a verve and energy that glowed throughout. His battle with Nathaniel Clyne was a feature of the first-half as Southampton plotted their passing angles with patience and precision, forcing United onto the back foot.

Morgan Schneiderlin and Victor Wanyama pulled the strings in midfield, while the dynamism of Lallana meant Saints always had options, even if chances on goal were scarce.

Jay Rodriguez headed over and Dani Osvaldo might have done better with only David De Gea to beat and, as Southampton bordered on the profligate, United were far more ruthless.

Van Persie had twice gone close in the opening 20 minutes, before Rooney's sublime pass set him in on goal once more, only for an offside flag to deny him the chance to finish. However, the brilliance of Januzaj ensured United would not be denied for long.

Picking the ball up in his own half, Januzaj threaded a 40-yard pass into the path of Rooney to slice Southampton open in the blink of an eye. Rooney's shot was brilliantly blocked by goalkeeper Artur Boruc, but Van Persie was quickly onto the rebound, rolling the ball beyond the despairing dive of Dejan Lovren to give United the lead.

It was the first goal Southampton had conceded in almost seven hours of Premier League football but it came from a familiar source - this was Van Persie's fifth goal in as many appearances against Saints but his first for five Premier League matches.

For a five-minute spell, Saints looked lost. Rooney rattled the crossbar with a thunderous shot but the visitors weathered the United storm and came again - Van Persie heading Lovren's header off his own line just after half-time.

And yet, United always carried the greater threat. Their movement in attack constantly confounded Southampton's defenders, with Rooney, Van Persie and Januzaj swapping places and eluding markers at will. The Dutchman might have a second goal as he headed onto the crossbar on the hour.

Moments later, Januzaj was in the thick of the action once more, unleashing a dipping, swerving left-foot drive that Boruc somehow clawed away.

Though Southampton refused to lie down - Lallana testing De Gea with a low shot - hope appeared to be draining away.

However, when Lovren forced Shaw's corner towards goal, Lallana got the faintest of touches to beat De Gea to earn Saints a point and extend United's poor league run to only two wins in seven matches.