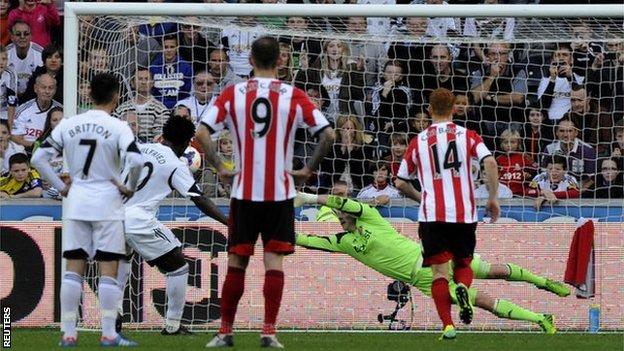 Black Cats defender Phil Bardsley skied a glorious chance at the far post before inadvertently scoring an own goal from Angel Rangel's corner, the first of three goals in seven minutes.

Jonathan De Guzman curled in a second and Wilfried Bony added a penalty.

Chico Flores headed in a late corner, credited as a Steven Fletcher own goal as Sunderland scrambled to clear.

It left the Black Cats with one point from their first eight Premier League games - their worst start to a season.

And their second-half capitulation provided Poyet with the evidence - if he needed it - of the size of the task he faces ahead of their next game, the Wear-Tyne derby against rivals Newcastle.

His side are rooted to the bottom of the table and have conceded 20 goals, which is more than any other side in the division.

For Swansea, an improved second-half display - including that three-goal burst - helped them wrap up the points and a first home league win since March.

However, the game could have been a different story if the visitors had managed to capitalise on a scrappy Swans performance in the opening half.

Scotland striker Fletcher was back from a shoulder injury after missing the last three games, and had his side's best chance of the first period.

"Sunderland played pretty well in the first half, especially defensively. But, in second half, Swansea came at them strongly and just blew them to bits. There wasn't much to get excited about attacking wise for the Black Cats."

Fletcher, who had scored twice at the Liberty Stadium on his Black Cats debut last season, latched on to an early corner only to send his left-foot shot the wrong side of the post.

Bardsley then had the goal in his sights, only to slice midfielder Emanuele Giaccherini's deflected cross horribly over from close range.

The miss, along with whatever Swansea boss Michael Laudrup said to his side at the break, crucially turned the game in the home side's favour.

Sunderland's goal led a charmed life as Michu angled a strike over, Bony shot high after Rangel's low cross to the near post and Nathan Dyer had a long range effort well saved by Kieren Westwood.

However, Swansea's pressure told when a corner went in off Bardsley before De Guzman quickly added another with a 22-yard curling shot into the top corner.

Poyet brought on ex-Swansea striker striker Fabio Borini and he could have reduced the deficit when played through on goal by Lee Cattermole, but he sidefooted high past onrushing keeper Michel Vorm.

Instead, it soon got worse for Sunderland when Bony stroked in a spot-kick after Craig Gardner had clumsily brought down Leon Britton.

And, despite keeper Westwood's heroics limiting the damage for Sunderland, he could not stop Flores powerfully headed in a corner - with the unfortunate Fletcher later credited with the final touch - to compound Poyet's misery.

"It was a very important win for us. It is a home win again after some time in the Premier League.

"We knew it would be difficult. They have a new manager but fortunately we did our job, especially in the second half.

"The players knew it was not good enough in the first half."

"It's difficult to take because there were things in the first half that we were able to do. We could not keep doing them in the second half and it is something we will look at.

"We have been doing well in first half of many games, in the second half it changed completely and we will try to address that.

"It is not a nice welcome to the Premier League for me but it is where we are. There is no place to hide and you have to take it.

"It's up to us. There is nothing to complain about and we will make sure we keep working to sort it out for next week when we play Newcastle, which is one of the biggest games for the fans."