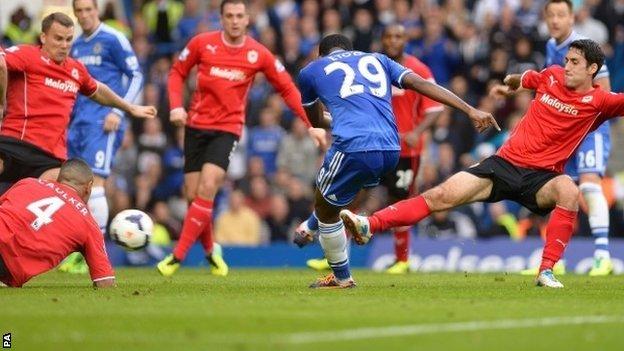 Chelsea fought back from a goal down to thump Cardiff after scoring an equaliser which should not have stood.

Jordon Mutch ran through to put Cardiff ahead after David Luiz's mistake.

But Eden Hazard levelled after Samuel Eto'o kicked the ball away as Bluebirds keeper David Marshall bounced it, which according to Fifa's rules is a foul.

A well-worked Eto'o goal put Chelsea ahead and, after their boss Jose Mourinho was sent to the stands, Oscar and Hazard sealed the victory.

Chelsea climb to second in the table but the scoreline was harsh on Cardiff - starting with the home side's equaliser in the 32nd minute.

The laws of the game stipulate that the ball is considered under the goalkeeper's control when he bounces it, but referee Anthony Taylor allowed play to continue before Hazard fired home.

Cardiff had taken the lead with a bizarre goal of their own. Luiz casually let the ball run past him after Ramires played it back to Cech, allowing Mutch to nip in and coolly slot home.

The Welsh side were showing no ill-effects of a turbulent two-week period that saw the future of boss Malky Mackay put in doubt when his head of recruitment, Iain Moody, was replaced by unknown 23-year-old Kazakh Alisher Apsalyamov.

Mackay has insisted he has no intention to quit, despite reports that Bluebirds owner Vincent Tan is also suggesting substitutions and tactics during games.

No clean sheet on Cech landmark

Petr Cech was making his 300th Premier League appearance for Chelsea but could not keep what would have been his 146th clean sheet. Jordon Mutch's goal for Cardiff was the 220th to have been scored past Cech in the league since he moved to Stamford Bridge in 2004.

Tan was not at Stamford Bridge and Mackay's tactics proved effective as his side soaked up Chelsea's attacks despite conceding the majority of possession, and frequently threatened on the break.

John Terry twice went close to levelling with headers but it took a superb save from Petr Cech to stop Peter Odemwingie extending Cardiff's lead with a header from Peter Whittingham's free-kick.

Chelsea's frustrations continued after their controversial equaliser, at least until Eto'o scored his first Premier League goal after 66 minutes by latching on to a Hazard pass and burying the ball past Marshall.

Mourinho had to watch what looked like being an anxious final 20 minutes from the stands, with Taylor ordering him from his technical area after he persistently complained to fourth official Trevor Kettle about the referee's decisions.

But Oscar's fine strike from the edge of the box gave his side breathing space in the 78th minute and Hazard made it four soon after, dancing into the box before beating Marshall at his near post.