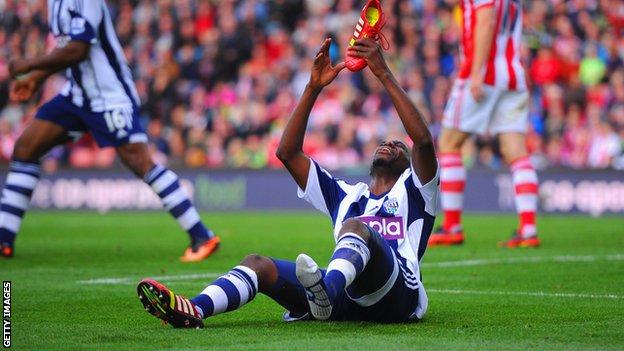 Stoke and West Brom played out a 0-0 draw at the Britannia Stadium, meaning Mark Hughes's Potters have only scored one goal in five Premier League games.

The Baggies had a strong appeal for a second-half penalty when Youssouf Mulumbu ghosted past Charlie Adam, only for Adam to tread on his heels.

Stephane Sessegnon should have won it for the visitors late on, but shot straight at Stoke keeper Asmir Begovic.

The hosts' best chance fell to Adam, whose shot from the halfway line was tipped over by Boaz Myhill, as the game finished goalless - as had their last meeting, in March.

West Brom are now unbeaten in five league games for the first time since April 2011, but Stoke have not won in the league since defeating West Ham in August.

After an opening where neither team's players seemed capable of passing to a player in the same coloured shirt, West Brom gradually started to have the better of the first half.

Sessegnon missed a great chance, beating two Stoke defenders, but his shot was easily gathered by Begovic, who made a fine stop soon after.

Fierce tracking back by Victor Anichebe won the ball back for Sessegnon, and when the Benin attacker played in Morgan Amalfitano, his clumsy first touch left him without enough space to lift the ball over the goalkeeper.

Stoke's best chance of the first half came from a well-rehearsed free-kick. Marko Arnautovic side-footed through to Stephen Ireland, whose pull-back was clipped away for a corner from the edge of the six-yard box.

West Brom's penalty claim came not long after the break as Mulumbu slipped past Adam in the penalty area with a deft change of pace, before the ex-Liverpool midfielder trod on the Congo player's heels.

Although referee Webb did not have a clear view, his assistant ruled there was no infringement.

Stoke used the close call to spur them on as Arnautovic pinged in a low cross at the other end, with Ireland blazing over the bar from close range.

Soon after, Adam tried his luck from halfway, with a rapidly backpedalling Myhill getting back just in time to tip over the bar.

Arnautovic and Ireland continued to link well, with the Austrian just short of prodding home the on-loan midfielder's cross.

Sessegnon should have won it in injury time, beating four players, but once again, could only fire straight at Begovic.

Stoke manager Mark Hughes: "It was well-fought and evenly matched. Our keeper made a number of outstanding saves, most notably at the end, for which we're very grateful. Nil-nil was a fair result for both teams.

"West Brom will question that penalty opportunity but I was saying the same thing at Fulham a couple of weeks back. Perhaps these things even themselves out.

"We're looking for that killer touch up front: we've used different combinations. We're very close - it's a matter of getting our noses in front in a match."