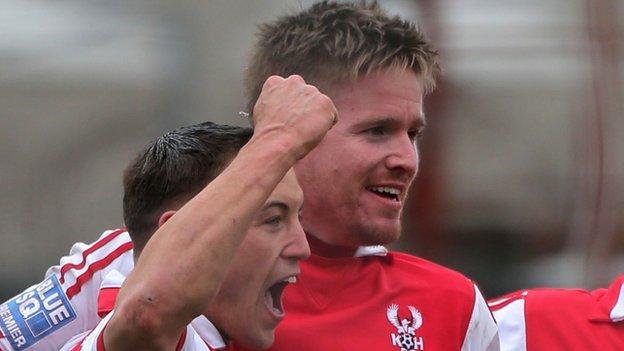 Kidderminster Harriers kept up the pressure on leaders Cambridge with a second successive 4-1 home win.

Top scorer Michael Gash, a 29th-minute replacement for the injured Nathan Blissett, put Harriers ahead by firing in from an indirect free-kick.

Andrew Boyce turned Joe Lolley's low shot into his own net before Kyle Storer's 25-yard strike made it 3-0.

Lincoln City were making their first of two visits to Aggborough in eight days. They are back there next Saturday to face Worcester City, the Harriers' tenants, in the fourth qualifying round of the FA Cup

Nick Wright pulled one back against his old side with a header, but Anthony Malbon added a fourth late on.

That was the fourth goal of the season for Malbon, last term's top scorer, who was also on as a substitute, after the break.

Storer's stunning strike was also his fourth of the season - and his second in successive home games, having also scored in the 4-1 win over Forest Green 10 days before.

Harriers had a goal disallowed after the break and an effort cleared off the line, while Lolley went even closer just after half-time, clattering the woodwork with a fine strike.

"I wasn't expecting to come on that early, but I've got to be pleased with a goal and two assists. It doesn't really matter how they go in, but it's always nice to hit those screamers.

"The most important thing is to get the three points. It was a fair result.

"They came here and made it difficult for us, but in the second half we kicked on and could have had more.

"I'm also pleased I got no reaction from the my groin injury. I'm just happy to be back."

"They were probably the best team we've played against. They've got the quality in the final third that can score those goals, which is why the place was full of scouts watching the forwards.

"If you'd seen a couple of those goals in the Premier League you'd have been in awe of them. They were unbelievable strikes.

"But we created chances against a very good team. That's the mark of where we need to be and it's taken them five or six years to put that team together.

"It's the first time this season that we've lost by more than one goal. It's a bit disappointing but we can't complain about the defeat because I thought they were a good team."