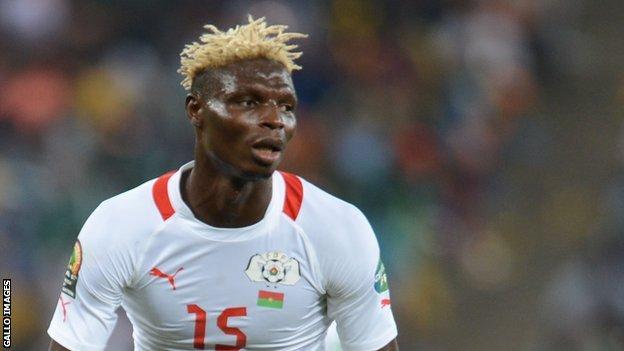 A controversial penalty decision helped Burkina Faso sneak victory over Algeria in the first leg of their World Cup play-off in Ouagadougou.

Algeria had twice come back from behind and looked set to take a 2-2 draw back to Blida for next month's second leg when Zambian referee Janny Sikazwe awarded a late spot-kick to the hosts, penalising Essaid Belkalem for handball.

It looked a harsh decision as Belkalem had his arms folded behind his back and was looking away from the ball, which was struck against him from about five yards away.

Aristide Bance, who had missed a penalty in the first half, stepped up and hit a powerful shot that keeper Rais M'bolhi got a hand to but was unable to keep out.

Algerian players had protested fiercely when the decision was made and there were confrontations between the players immediately after Bance's strike.

The goal changed the face of the tie, which had been tipped in Algeria's favour thanks to their two away goals.

Algeria have appeared at the World Cup finals three times, while Burkina Faso have never qualified.

"If we win the second leg 1-0, it will be enough,'' said Algeria assistant coach Nourredine Kourichi. "The second leg will be difficult for Burkina and for us as well but we are hopeful. We are optimistic.''

And Burkina Faso will look back with relief, having defended poorly throughout and failed to take their chances at the other end as they clearly missed injured striker Alain Traore.

The first real chance came when Jonathan Pitroipa was felled in the area near the end of the first half and Sikazwe awarded a penalty. But Bance's effort was easily saved by Mbolhi.

Then in first-half stoppage time the hosts did make a chance count when Pitroipa headed in from an unmarked position, continuing his fine form over the past year.

However, Algeria emerged in determined mood after the break and were soon back on level terms when Islam Slimani slipped a pass to Sofiane Feghouli and he cut inside a defender to slot home into the corner.

Soon after, Feghouli missed a good opportunity to put his side ahead when he shot straight at Daouda Diakite - a rare moment of certainty from the Burkinabe keeper who looked shaky throughout.

And instead, Burkina Faso regained the lead thanks to some powerful play from Djakaridja Kone. The midfielder took the ball down on his chest about 25 yards out, pushed the ball past the defender and rifled a low, left-foot shot into the far right corner.

However, the lead lasted only three minutes, the hosts again punished for sloppy defending as Carl Medjani ghosted in to head in and restore parity once more.

It looked like Algeria would go into November's second leg in the ascendancy, until referee Sikazwe's intervention.

And while Bance took the chance to redeem himself, Algeria's players were given a reminder of just how cruel football can be.