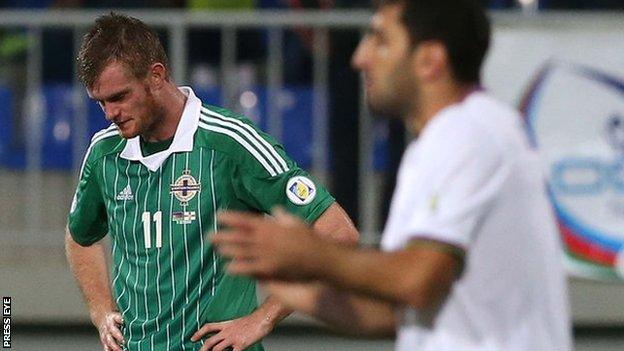 After another night when the self-destruct button was firmly pressed by Michael O'Neill's players, the squad completed the four-hour trip to Tel Aviv ahead of Tuesday night's last game of the group against Israel.

From a radio point of view, the game in Azerbaijan was always going to be the most difficult of the campaign.

Emails aimed at having a broadcast line installed at the ground began weeks ago yet it didn't materialise, not for the want of trying.

The TV broadcasters had decided not to send their commentators to Baku and instead add commentary to the pictures back in the UK.

Luckily, we were prepared for the worst case scenario as the same thing had happened on our last visit nine years ago.

Our plan B and plan C worked, although as the story of the game unfolded it must have made for painful listening.

The decision to set the team up 3-5-2 worked well in the first half, but yet again Northern Ireland failed to convert periods of dominance into goals and paid the penalty in the second half.

Once Azerbaijan scored their opening goal a home victory was inevitable.

I don't know if it's a fragile mentality among this group of players, as a result of so many similar stories and poor results, but I never get the impression after going behind that the players believe the situation is retrievable.

The change between the first half performance and that in the second was incredible. Yes, Azerbaijan did make a change at half-time but it was still at that stage 3 v 3 in midfield.

Captain Steve Davis summed it up perfectly after this latest defeat when he said that he was fed up coming out after games saying the same things over and over again.

During the commentary we were surrounded by fans, not ideal, but on the final whistle we got a real sense, up close and personal, of what it meant to them to win a game.

They celebrated as if they had qualified for the finals. I suppose when you've won just one of your previous 31 World Cup matches you're going to savour the moment.

We went to the team hotel after the game last night to interview manager Michael O'Neill and he was clearly hurting.

I sometimes wonder if all of the players feel the pain of a defeat as much as he does. Some clearly do, others, I'm not so sure.

It was 2am when we got back to our own hotel. Flicking on the television in the room I watched highlights of Israel's 1-1 draw in Portugal and immediately feared the worst.

This game in Tel Aviv will be a tough test, especially without Gareth McAuley, Jonny Evans and Oliver Norwood, who are all suspended.

The trio joined the rest of the squad and officials on the charter flight for the trip to Israel from where it's expected they'll fly home before the game on Tuesday.

Check-in and security checks were extensive and thorough but as a result time consuming.

It's amazing the amount of equipment that goes with the team on their travels. It makes the kit man's job pretty tough on days like this. Raymond Millar and Stephen Ferguson are the trusty duo and they spent six hours this morning at security, customs and check-in.

Sammy Clingan and Niall McGinn did their best to clear out my personal travelling tuck shop during the flight, Michael McGovern was much more disciplined although the chewy sweets did help break his resolve.

John O'Neill has suggested the introduction of rations to make sure the crisps and chocolate last the next few days. Which reminds me, must go and hide my suitcase.