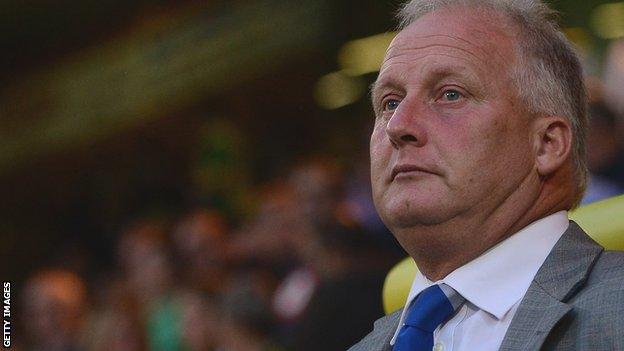 Bury have sacked manager Kevin Blackwell with the Shakers lying fourth from bottom of League Two.

Blackwell, 54, had been out of football for more than two years when he

He was as the club battled against severe financial issues for much of last term.

after a takeover was completed in May, but on Saturday signalled the end of his tenure.

Former Leeds, Luton and Sheffield United boss Blackwell arrived at Bury - a club at which he had previously been assistant manager to Neil Warnock - with the Shakers rooted to the foot of League One and without a win from their first nine matches in all competitions. It took another seven attempts before they finally registered a victory.

But it soon became clear that the problems ran far deeper than on the pitch when, in December, the Football League on the club for taking a short-term loan from the Professional Footballers' Association.

The embargo was lifted weeks later, but then when the PFA were again asked for financial help.

At one stage the club's existence looked in serious danger, with the club just days before in April.

The began a significant rebuilding process for Blackwell, who lost a large percentage of his squad at the end of the 2012-13 campaign as a result of the club's financial problems.

But the influx of new signings have failed to deliver the expected results, with Bury winning only two of their first 11 league games.