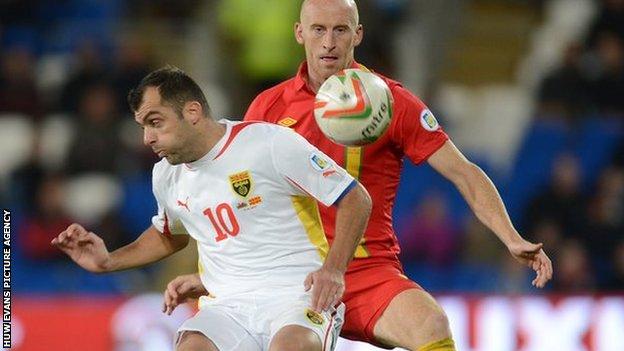 Defender James Collins has targeted further Wales caps after returning in the 1-0 victory over Macedonia.

The West Ham player was restored to the squad after settling his differences with manager Chris Coleman.

And Collins gave an impressive performance in central defence as Wales won their penultimate World Cup qualifying match, in Cardiff.

"I want to play for Wales. I'm still only 30 and feel I've got a load more caps in me," Collins said.

Coleman accused the former Cardiff City and Aston Villa defender of rejecting the chance to join the Wales squad before their game against Serbia in September.

Collins denied that and, after contacting Coleman in midweek, met with the national coach for talks and was subsequently added to an injury-hit squad.

He was pleased to start against Macedonia after the frustration of being left out of the squad in September.

"I was disappointed not to be in the squad and things didn't go too well after that," Collins added.

"But that's behind me now. We've had our chat and sorted it out and [I was] here to play.

"It was great to get 90 minutes for Wales and probably my best [performance]."

Simon Church's goal secured victory over Macedonia, the side's third win of their Group A campaign, which lifted them into fourth spot.

The game was Cardiff City striker Craig Bellamy's final home game for Wales after he announced his retirement from international football.

Bellamy will make his last appearance for Wales against Belgium on Tuesday, and Collins paid tribute to the 34-year-old's contribution to the national side.

"He leads by example in everything he does and I'm sure everyone at Cardiff will say the same," Collins said.

"He's great in training, he's great with the young lads off the pitch and you can tell by his performance every time he puts that red shirt on that he gives 100%.

"He'll be a great loss on and off the pitch."

Belgium secured their place at next summer's World Cup in Brazil with a 2-1 win in Croatia on Friday.

Collins acknowledges it will be a tough test in Brussels.

"I'm pretty sure everybody's expecting us to get beat," he said.

"We'll go there and play as we can and hopefully we can nick something."