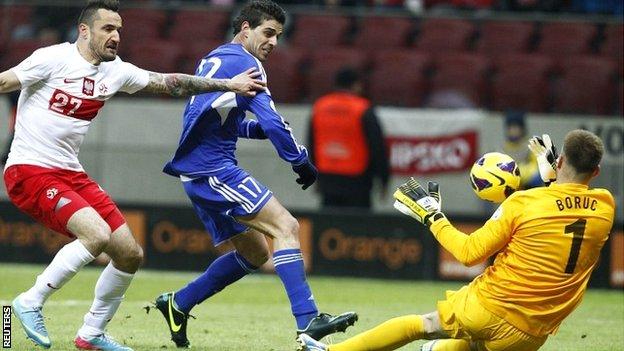 Inspired by Tomaszewski's goalkeeping, Poland held England 40 years ago when - just like this week - the hosts needed a win to reach the finals.

"Artur is one of the best keepers in the world," said Tomaszewski. "But can he stop England on his own? No.

"I made mistakes in 1973, but my team-mates saved us. Our defence isn't so good now. Artur must rely on himself."

On his first visit to Wembley, Tomaszewski was famously dubbed a "clown" before kick-off by Brian Clough, but made a series of superb saves as Poland clinched a 1-1 draw that saw them qualify at England's expense.

At the finals in West Germany the following year, Tomaszewski, then 26, saved two penalties and his nation beat Brazil in the third-place play-off in their joint-best showing in the tournament.

Poland are no longer in contention to make the 2014 finals, but with top-class players in Borussia Dortmund duo Robert Lewandowski and captain Jakub Blaszczykowski, they still pose a threat as England bid for the victory that would guarantee a place in Brazil next summer.

Tomaszewski, now 65 and a politician in Poland, will be at Tuesday's game and told BBC Sport: "I wish there was more riding on it for Poland so it was a big game for both of us.

"But we still need to perform well at Wembley because we are building a team for Euro 2016. A good performance would really motivate us.

"There is no pressure on Poland and England will be very stressed because they have to win, otherwise their supporters won't forgive them.

"If England don't win, Poland will be famous again," added Tomaszewski, who will be among about 18,000 Polish fans at Wembley on Tuesday.

Boruc has been in fine form for Saints this season, keeping five clean sheets in seven Premier League games.

In contrast, England keeper Joe Hart has been criticised after making some costly errors for Manchester City.

But England manager Roy Hodgson stuck by Hart for Friday's crucial 4-1 win over Montenegro, and Tomaszewski is sure he will keep his place against Poland too.

"Joe Hart is a top keeper, and even the very best make the occasional mistake," he said.

"The most important thing for England is that he knows the defenders who play in front of him. They trust him, and he trusts them.

"Putting a new goalkeeper in at this stage would be extremely risky.

"I think he will play well against Poland and I am convinced that, if England do go to Brazil, he will be one of the best goalkeepers at the tournament."