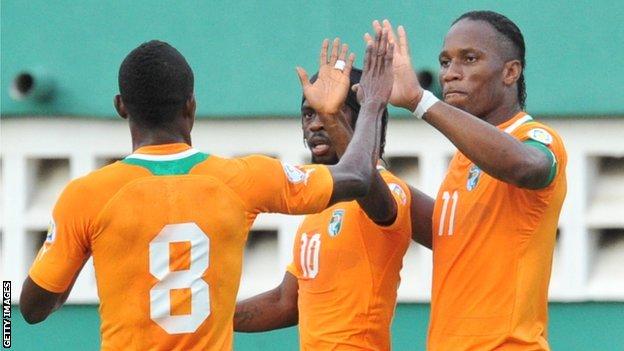 Ivory Coast took a large step towards qualifying for their third World Cup in a row by beating Senegal 3-1 in the opening leg of their play-off.

A Didier Drogba penalty and an own goal from Lamine Sane gave the Elephants a commanding first-half lead.

Salomon Kalou added a third in the second half but Papiss Demba Cisse pulled one back deep in stoppage time.

The second leg will be played in Morocco next month, because Senegal are barred from playing at home.

The ban results from their last competitive meeting with the Ivorians, who were leading an African Cup of Nations qualifier 6-2 on aggregate when rioting inside the Leopold Senghor Stadium forced the game's cancellation.

If Senegalese fans found that scoreline hard to swallow, they would have been similarly unimpressed with their side in Abidjan as Drogba fired the home side into a fifth-minute lead.

After Gervinho was fouled by Cheikh Kouyate, the talismanic striker sent Senegal goalkeeper Bouna Coundoul the wrong way from the spot.

Worse was to come for the visitors just nine minutes later when Gervinho cut in from the flank and fired a shot that was helped in by a massive deflection off defender Lamine Sane, leaving Coundoul with no chance.

And Ivorian players and fans might have started to permit themselves thoughts of Brazil as the Elephants went 3-0 up just minutes into the second half.

Gervinho, who now plays at Roma after an underwhelming spell at Arsenal, was involved again, breaking free from a crowd of players before teeing up Kalou, who took a touch before tucking home.

Minutes later, it was the turn of reigning African Footballer of the Year Yaya Toure to try his luck but his effort was blocked out by some committed Senegalese defending.

That could yet prove a crucial intervention because instead of being four goals down going into the second leg, Senegal will only trail by two after Cisse scored with the very last kick of the match.

In the 96th minute the hosts failed to clear a corner, allowing the Newcastle United striker to poach a goal that prompted the Ivorian players to collapse to the turf in frustration at the final whistle seconds later.

If the late goal was disappointing for the hosts, so was the booking for Cisse's club colleague Cheick Tiote - a second caution of the qualifying campaign ruling him out of the away leg on 16 November.

Even so Ivory Coast, frequently described as the strongest side on the continent, take a healthy advantage into the game in Casablanca, where Senegal will need to deliver one of their best performances of recent years if they are to qualify for their first World Cup since reaching the quarter-finals in 2002.

"We showed today that we can be a team," Kalou told BBC Sport. "We scored early, which gave us the confidence to go forward and score more.

"I think it's a good victory. We can be positive about the next round because there is one more game to go, but we did one step and we have to fight to get the second one."