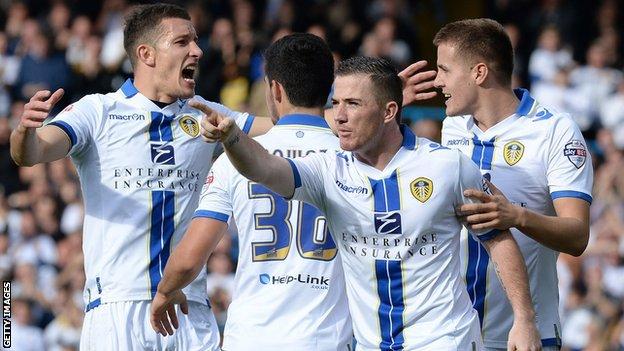 Blues goalkeeper Darren Randolph's poor clearance from a long ball allowed Ross McCormack to guide a shot into an empty net for the home side's opener.

Rodolph Austin headed in a McCormack cross and Matt Smith then slotted home after Randolph's parried save.

David Murphy's free-kick hit the Leeds post before Smith headed in a fourth for the home side.

Manager Brian McDermott's first defeat as Leeds boss was a loss at Birmingham in April but there was little chance of another reverse this time around.

Leeds had too much quality and determination for the visitors, who did not help themselves with their defensive showing.

Blues centre-back Dan Burn set the tone for his team's play when he missed an interception and left McCormack clean through on goal, but the Leeds forward shot straight at keeper Randolph.

A close range Jason Pearce header went over and McCormack had another effort saved by Randolph as the home side continued to struggle at the back.

However, it was not long before the visiting side's continual sloppy play caught up with them and Leeds were rewarded for their determined efforts.

Keeper Randolph came to the edge of his box to make a clearance but he only managed to find to Austin, who passed for McCormack to guide in a 20-yard effort into an empty net.

Leeds midfielder Alex Mowatt almost helped the visitors back in the game when his clearance found Chris Burke but the Blues winger's shot went just wide.

However, the Elland Road side extended their lead when Austin started a move which he finished when he nodded in McCormack's cross.

A McCormack shot was parried by Randolph and Smith was quickest to the loose ball to tuck in a third Leeds goal just before the break.

Birmingham improved in the second half and Burke had a chipped cross cleared off the line by Tom Lees before Nikola Zigic had a shot palmed over by keeper Paddy Kenny and Murphy's free-kick hit the woodwork.

However, Smith thumped in a header from Mowatt's cross to add more gloss to a win which moved Leeds up to ninth.

"We managed to get some width into the team today and that was important.

"My teams have always had width, as anyone who saw Reading when I was there will tell you.

"We spoke beforehand about having a winning mentality. The more games you play, the more you learn how to win and today we got closer to where we want to be."

"I don't do excuses, I do reality. I will never tell anyone what I tell players in the dressing room but we are all disappointed.

"That is not acceptable to the badge on the front of the jersey.

"We didn't do anything right in the first half and our defending by the whole 11 was very poor.

"Our passing and forward play were very average in the first half, so it was a frustrating afternoon and we got what we deserved."