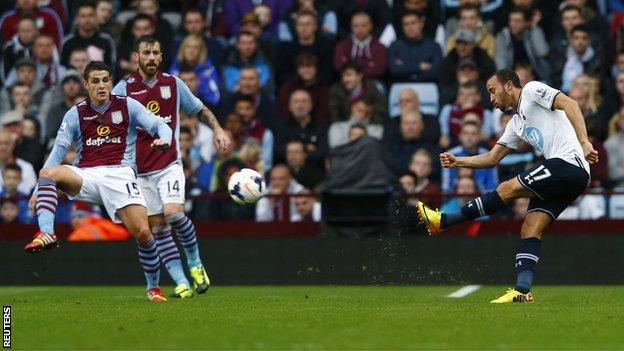 England's man of the moment Andros Townsend helped Tottenham bounce back from their shock home loss to West Ham United with a convincing win at Aston Villa.

Townsend, outstanding in England's victories against Montenegro and Poland that secured their place at next summer's World Cup in Brazil, broke the deadlock with a fortunate first-half goal as his cross floated beyond Villa goalkeeper Brad Guzan.

Sadly the goal was overshadowed by an ugly incident as referee's assistant David Bryan was struck by a smoking flare thrown by a celebrating Spurs fan - although he recovered to continue.

As Aston Villa struggled to make on impact on Spurs' defence, manager Paul Lambert called on fit-again striker Christian Benteke as a substitute for the last 30 minutes but it was to no avail.

Roberto Soldado wrapped up the three points that takes Andre Villas-Boas' side up to fifth place in the Premier League when he rounded off a sweet passing move with a clinical finish after 69 minutes.

There will, however, be focus on that incident in which the referee's assistant could have been more seriously hurt - with the Football Association sure to want further details of events in the aftermath of Townsend's goal.

In a largely undistinguished first half it was, almost inevitably, Townsend who made the first decisive contribution after 31 minutes with a goal that contained more than an element of good fortune as his whipped cross from the right flank eluded everyone, including Guzan, and crept in.

"It is Tottenham's fourth successive away win without conceding a goal. Andros Townsend was the star of the show. He scored a first-half goal he didn't really mean. Roberto Soldado worked hard to create an opportunity which he finished."

Townsend's first Premier League goal for Spurs was followed by the incident in which the smoke bomb, hurled from among the visiting fans, struck the referee's assistant on the back. He took a few moments to regain his composure after the understandable shock and was fortunately able to carry on.

Villa, who had lacked serious threat, apart from when Spurs goalkeeper Hugo Lloris had to turn away Ashley Westwood's free-kick, had another opportunity when Andreas Weimann fired a shot into the side-netting from the edge of the area.

Spurs ended the half on top and Guzan did well to turn away another Townsend effort - and repeated his heroics four minutes after the break from Paulinho.

Villa fans had been chanting for the introduction of Benteke from the opening moments of the second half and they got their wish on the hour when he replaced Libor Kozak.

And the powerful Belgian striker almost made his mark inside three minutes when he headed just over from Leandro Bacuna's cross.

It was Spurs, however, who had the quality to put the game out of Villa's reach with the slickest of goals that hinted at the quality in their squad.

"It was pretty tight. We had chances and there wasn't much in it. In the second half we came out and played really well.

"I thought they scored against the run of play in the second half. We were playing really well, with confidence and the crowd were really up for it.

"Starting with Christian Benteke was a big ask because he has only trained a couple of days in a month. He got 30 minutes and that will have done him the world of good."

To see a photo album of the Aston Villa-Tottenham Hotspur match go to the BBC Sport Facebook page.