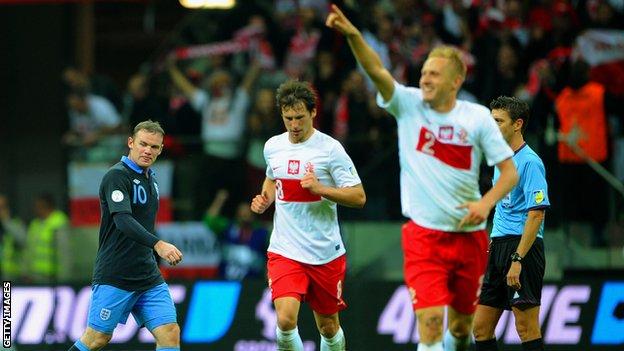 Poland will not make it easy for England to secure the win they need to guarantee a place at next year's World Cup, says captain Jakub Blaszczykowski.

England host Poland on Tuesday knowing anything but victory would mean Ukraine, who play San Marino, would probably qualify automatically.

Blaszczykowski, whose side cannot qualify for Brazil 2014, said: "There are sure to be many Polish fans there.

"We want to thank them with a good game and the right result."

The Borussia Dortmund winger added: "It doesn't matter that we only have honour to play for. Matches at Wembley are always very important to us."

Team-mate Robert Lewandowski acknowledged the visitors "won't be favourites" but added: "We want to at least allow our supporters a little fun."

Poland's hopes of qualifying from Group H were ended by a 1-0 defeat in Ukraine on Friday.

But it is likely they will be cheered on by a large number of supporters at Wembley, with reports suggesting 18,000 tickets have been sold to Poland fans.

The teams drew 1-1 in Warsaw when they met last year.

But former England striker Michael Owen told BBC Radio 5 live's Sportsweek programme he expects Roy Hodgson's side to win comfortably, just as they did against Montenegro 4-1 at Wembley on Friday.

"When you need to qualify, you go one step further for the cause," the 33-year-old, who scored 40 international goals, said.

"Poland will meet a team hungry to get to that World Cup. I expect us to win again. I think it'll be pretty comfortable - something like 3-0."

Owen said the team that defeated Montenegro gave him confidence for the future.

"When I saw the line-up I thought 'it looks fantastic'," he said. "That's as exciting a team as I've seen for a long time."

"England needed to beat Montenegro to bring it all back to a familiar place - requiring victory over old adversaries Poland at Wembley on Tuesday."

England's Wayne Rooney believes the national side have the right personnel to perform well at the World Cup should they qualify.

Tottenham winger Andros Townsend made a goal-scoring debut against Montenegro and Rooney believes he is one of a group of talented youngsters in the squad.

The Manchester United forward said: "Andros did great, he's an exciting player with a great future - and then you have Danny Welbeck, Daniel Sturridge, Phil Jones, Chris Smalling, Jack Wilshere, Alex Oxlade-Chamberlain, Theo Walcott - the players we have got there, there's some talent."

Hodgson, who took charge prior to Euro 2012, has seen his side win five of their nine qualifying matches to reach 19 points, one ahead of second-placed Ukraine.

The 66-year-old said Friday's victory was the response he was looking for to comments made by Football Association of Montenegro president Dejan Savicevic following the 1-1 draw in Podgorica in March.

"He said we don't care about the shirt whereas Montenegrans throw themselves into everything," said the England boss.

"It was a complete load of rubbish - but because we played badly in the second half, and they got a 1-1 draw, I had to swallow it.

"He might be changing that opinion after watching us swarm all over his players."