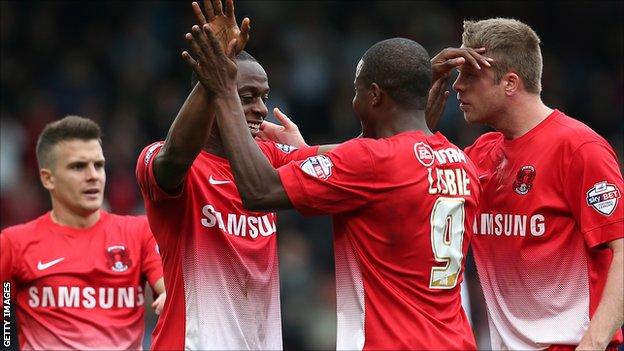 Leyton Orient manager Russell Slade believes his unbeaten side is yet to receive the credit they deserve despite topping the League One table.

The O's came back from a goal down to beat fellow promotion hopefuls MK Dons 2-1 on home turf, in front of a season's-best 6,359 crowd.

Only Championship side QPR have managed to also maintain an unbeaten record.

"We don't get the credit for the sort of football we play," Slade told BBC London 94.9.

"We play some excellent football, we're able to mix it up but some of the interchanging between midfield, front men and our wide men is exciting.

Orient's prolific strike force of Kevin Lisbie and David Mooney are on nine goals apiece in all competitions and have been ably supported by Shaun Batt who has six.

The trio have contributed to an overall 27 league goals scored and an impressive plus-19 goal difference.

Former Charlton and Ipswich striker Lisbie was on target against the Dons, striking midway through the second half to seal the points before making way for Batt soon afterwards.

"I'd like to make a special mention for Lis [Lisbie], he's been fighting a dead leg all week, we loaned in a special bit of equipment that was expensive to try to get him there and it was 50-50," Slade said.

"He's managed to turn out and we've kept him on the pitch long enough for him to get us a vital goal."