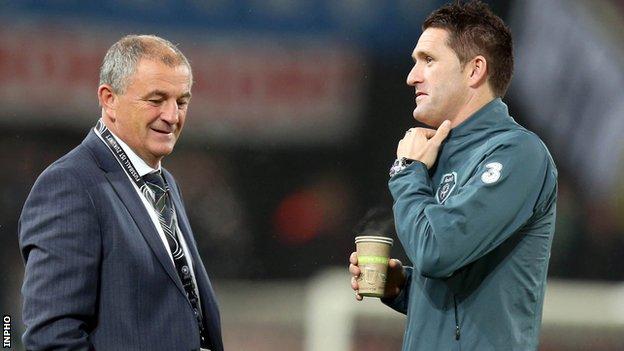 Skipper Robbie Keane remains in contention to return to the Republic of Ireland team for Tuesday's final World Cup qualifier against Kazakhstan.

The 33-year-old LA Galaxy striker, who has made 129 appearances for the Republic, missed Friday's 3-0 defeat by Germany because of an ankle injury.

However, interim manager Noel King said Keane will be given every opportunity to prove his fitness by Tuesday.

"I am hoping he is fit for selection. Robbie is still recovering," said King.

Following King's comments, Keane took part in training later on Sunday and the striker's chances of being involved on Tuesday looked to have improved.

Anthony Stokes replaced Keane in Cologne and, while the Celtic striker missed a couple of chances, his overall performance means he could again start in Dublin if the captain is ruled out.

Opinions were divided about the Republic display, with goalkeeper David Forde having to make a series of brilliant saves to prevent more German goals.

However, the Irish also missed at least three good chances and King is continuing to take positives from the defeat, which ended the Republic's slim mathematical hopes of World Cup qualification.

"If we can be better at doing what we are doing, well that's the way forward.

"But then a man comes in and he may decide to play a different way. That would be his prerogative."

King insists the new man will have a good squad at his disposal.

He said: "There are certainly players in the under-21s and lower who are going to be full international players... who are on the way, champing at the bit."

Norwich midfielder Anthony Pilkington is ruled out of Tuesday's game because of injury but Wes Hoolahan and Andy Reid could be in contention to start with the Republic likely to have more possession against Kazakhstan.