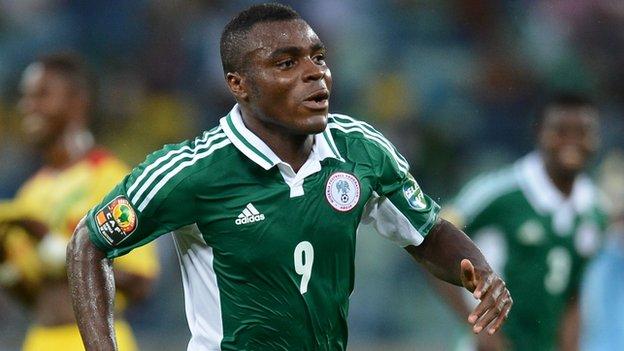 Nigeria survived a scare in Addis Ababa as the African champions rallied to beat Ethiopia 2-1 in the opening leg of their World Cup play-off.

The hosts were the superior team for the first hour and led after 56 minutes as Nigerian goalkeeper Vincent Enyeama misjudged a cross from Behailu Assefa.

Nigeria, who were not at their best, equalised through Emmanuel Emenike's ferocious drive after 67 minutes.

Emenike then won and scored a penalty late on to secure the win.

The match was in the 90th minute when Aynalem Hailu needlessly brought the Nigerian down, allowing the Turkey-based striker to coolly slot home a decisive goal.

"Ethiopia's play scared us in the first half but we showed why we are the African champions in the second half - that's what makes the difference," assistant coach Daniel Amokachi told BBC Sport.

Bidding to qualify for their fifth World Cup in six attempts, Stephen Keshi's side grew stronger as the game wore on and could have led after 77 minutes as Ahmed Musa thumped a close-range strike against the inside of the post.

Defeat was cruel on Ethiopia coach Sewnet Bishaw, who impressed with their technical play but lacked a cutting edge in the final third.

Trying to become the first East African nation to appear at a World Cup, the Walya Antelopes thought they had opened the scoring after 24 minutes through Saladin Said.

The forward controlled a long diagonal ball well and managed to beat Enyeama only to see Gofrey Oboabona clear off the line, with many inside a packed Addis Ababa Stadium - Said included - believing a goal had been scored.

When Ethiopia did make the breakthrough it came in similar style as Enyeama was slow to react to a left-wing cross from Assefa, leaving himself badly positioned as he caught the ball behind the line.

The visitors, for whom Nnamdi Oduamadi had missed a good chance in the first half, had an early opportunity to draw level only for some smart goalkeeping from Jemal Tassew to deny Victor Moses.

The Super Eagles did not have to wait long for their equaliser, however, as Emenike took possession 30 yards out before drifting forward and rifling home a blistering strike.

The goal took the wind out of the hosts's sails and they were fortunate to survive when Musa got behind the defence and hit the post with Tassew beaten.

Ethiopia substitute Addis Hintsa missed two presentable chances in the dying minutes, as the match looked set to end in a draw.

While that may have been a fairer reflection on the game, Emenike had other ideas, piling into the box and forcing a rash challenge from Hailu, who clearly tugged the Nigerian's arm.

Emenike's second goal of the game completed a smash-and-grab win and ensured that Nigeria are favourites to progress to their second straight World Cup when the two sides meet again in Calabar on 16 November.