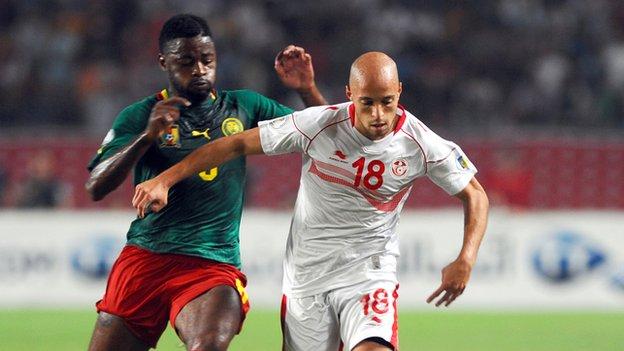 Tunisia and Cameroon both spurned several glorious chances as the first leg of their World Cup play-off ended goalless at the Rades Stadium.

The best chance of the match fell to the visitors, but Pierre Webo somehow chested the ball wide with the goal at his mercy just five yards out.

Cameroon could have won a late penalty when Sameh Derbaly seemed to handle.

After the defender fell in the area 10 minutes from time, the ball touched his arm but neither the referee nor any of the Cameroonian players appeared to spot the infringement.

It was a let-off for the hosts, as was Webo's extraordinary miss midway through the second half.

The striker had the whole goal to aim at as Tunisia goalkeeper Moez Ben Cherifia inadvertently palmed Enoh Eyong's cross into his path, but he chose to chest the ball rather than stoop to head it and the effort trickled wide.

While that was the best chance of the game, the Carthage Eagles will reflect on a host of missed opportunities.

Even though the Indomitable Lions kicked off, Tunisia fashioned an opening after only 10 seconds as captain Yassine Chikhaoui forced Itandje to save.

The goalkeeper pulled off an even better stop 15 minutes later as he tipped over a long-range effort from Wissem Ben Yahia that was heading into the top corner.

The waves of Tunisian pressure kept coming and two minutes later, Itandje - preferred to Carlos Kameni - was relieved that a firm Chikhaoui header from close range was straight at him.

While the hosts had the better of the opening exchanges, Cameroon - Africa's most frequent visitors to the World Cup with six appearances - finished the first half the stronger.

Four minutes before the break, midfielder Jean Makoun should have done better than drag an effort wide after a good cutback from Samuel Eto'o, who ended his self-imposed international exile after a request from Cameroon President Paul Biya.

In the 55th minute, the Tunisians created arguably their best chance when substitute Fakhreddine Ben Youssef charged into the area before heading a fine cross firmly back across goal - but just wide.

Tunisia, who failed to qualify for the 2010 World Cup despite appearing at the three previous tournaments, were frustrated again when defender Alaeddine Yahia met a corner only to direct a powerful header straight at Itandje when anywhere either side would have been a goal.

Webo's moment followed soon after, as did Derbaly's handball, but an absorbing encounter ended with the home side ruing their missed chances.

Cameroon will consider the first half of their mission accomplished, although a score draw in Yaounde on 17 November would take their opponents to Brazil.