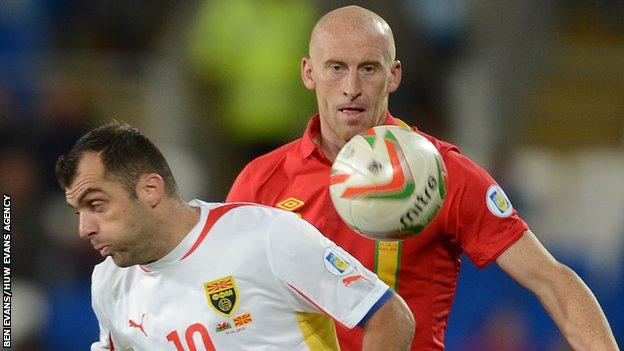 Chris Coleman has praised James Collins for the way he marshalled Wales' young defence in Friday's in their World Cup qualifier.

The West Ham centre-back was back in the squad before the clash after settling his differences with Coleman.

"He [Collins] was brilliant. I could sense it before the game that he would stand strong," manager Coleman said.

Coleman will be hoping Collins, 30, can repeats his stand-out performance for an injury-hit Wales side against the Group A winners.

"He had a young back four around him and his organisation was superb. He was an absolute rock," said Coleman.

Wales climbed off the bottom of Group A with the victory at Cardiff City Stadium and leapfrogged Macedonia and Scotland into fourth place.

Coleman was without 11 senior players because of injury and suspension, but his options were improved in midweek when Collins met the national coach for peace talks and was subsequently added to the squad.

The Wales boss had accused the former Cardiff City and Aston Villa defender of rejecting the chance to join the Wales squad before their game against Serbia in September, a claim Collins had denied.

The timely return of Collins for his 42nd cap saw him paired alongside Chris Gunter - normally a full-back - in the centre of defence, with Cardiff City's 18-year-old full-back Declan John making his debut and Swansea left-back Neil Taylor switching to the right.

Coleman added: "It took courage for him [Collins] to pick up the phone. He could have easily left it.

"A lot of people would have looked at it and thought, 'Macedonia at home, 10 pull-outs, then Belgium away'.

"He could have had an excuse as we needed a centre-back and we were going into a cauldron, but he came down.

"We had a good conversation. I promise you it wasn't a laugh or a joke or a pat on the back.

"We both had it out and were honest. It's how you get things sorted."