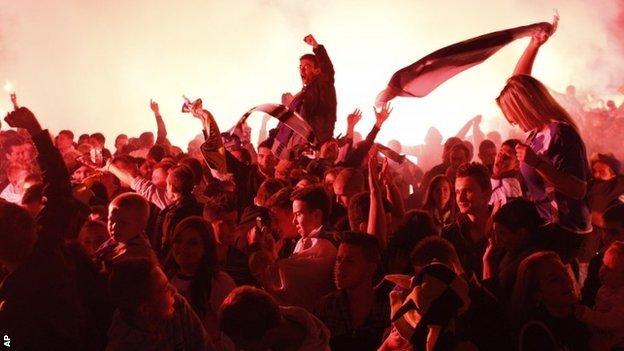 Bosnia-Hercegovina have qualified for their first World Cup finals as an independent nation after beating Lithuania 1-0 to finish top of Group G.

World champions Spain also made sure of their place at Brazil 2014, along with and Russia.

The draw for the seeded play-offs takes place on 21 October in Zurich.

Denmark, who were runners-up in Group B, missed out as they were the second-placed team with the worst record in games against the teams finishing first, third, fourth and fifth in their group.

The group was already decided ahead of Tuesday's games. Belgium, who had qualified automatically, were held to a 1-1 draw by Wales.

Croatia, who were already guaranteed second place, were beaten 2-0 by Scotland - a result that led their manager Igor Stimac to offer his resignation.

Stimac said: "Never mind that we qualified for the play-offs, I want to show some morale, certain responsibility and if there is anyone in the federation that does not believe in my work I want to give them the chance to change. They will have a meeting to discuss it."

The Scots' victory lifted them above Wales and into fourth place. Macedonia, who were thrashed 5-1 by Serbia, finished bottom.

Italy, who had already won the group, were behind twice against Armenia in Naples but goals from Alessandro Florenzi and Mario Balotelli gave them a 2-2 draw that ensured they ended their qualifying campaign unbeaten.

Bulgaria's home defeat by the Czech Republic allowed Denmark to overtake them and finish second, with a 6-0 win over Malta although they will not be in the play-offs. Armenia ended up finishing fifth.

Germany, already through as group winners, fought back from 2-0 down to clinch a thrilling 5-3 win over Sweden, who were already secure in their play-off place.

Chelsea forward Andre Schurrle crowned his side's comeback with a second-half hat-trick in Stockholm as the two sides fought out their second eight-goal qualifier in the space of 12 months, following a 4-4 draw in Berlin.

The Republic of Ireland finished fourth after beating Kazakhstan 3-1.

Ciprian Marica scored twice to give Romania a 2-0 win over Estonia that saw them clinch a play-off place ahead of Turkey.

Marica opened the scoring from the penalty spot in the first half and sealed victory nine minutes from time with a header from Alexandru Matel's cross.

Turkey had started the day in second place, ahead of Romania on goal difference, but were beaten 2-0 in Istanbul by the Netherlands.

The Dutch finished their campaign nine points clear at the top, with nine wins and a draw from their 10 games.

Iceland, who have never reached the finals of a major tournament, took on Norway in Oslo knowing they only needed to match Slovenia's result to finish runners-up.

Russia got the point they needed to win the group in Baku, drawing 1-1 with an Azerbaijan side who only equalised in the last minute.

That means Portugal, who beat Luxembourg 3-0 without the suspended Cristiano Ronaldo, will be in next month's play-offs.

Russia's former England coach Fabio Capello said: "I am very happy with the qualification because we faced a strong opponent like Portugal, and because we played good matches.

"It was just the one against Northern Ireland (a 1-0 defeat in August) where we didn't play a good match."

There were wild celebrations in Sarajevo's central square after Bosnia-Hercegovina beat Lithuania to book their place in Brazil.

Their winner came in the 68th minute when Manchester City striker Edin Dzeko found the unmarked Ibisevic to the delight of some 10,000 travelling Bosnian fans.

Thousands more back home watched the game on big screens erected in city squares around the country.

Bosnia narrowly missed out on the 2010 World Cup and Euro 2012, both times losing to Portugal in the play-offs.

The team booked a special flight from Lithuania to return straight home and join the celebrations.

Greece, who beat Liechtenstein 1-0, finished level on points but with a vastly inferior goal difference.

Marko Devic scored a hat-trick as Ukraine crushed San Marino 8-0 but they had to settle for a play-off place after England beat Poland 2-0.

Ukraine will hope it is fourth time lucky in the play-offs, having failed to reach the World Cup finals that way in three previous attempts.

Spain, who only needed to avoid defeat against Georgia to qualify, clinched a comfortable 2-0 win.

The world champions' goals came from Manchester City striker Alvaro Negredo and Chelsea playmaker Juan Mata, who scored seconds after he came off the bench.

Spain boss Vicente del Bosque said he was satisfied with his side's qualifying campaign, explaining: "We had a few problems against the lesser teams but we also showed our strength against a powerful France side (who they beat 1-0 in Paris in March).

"We almost, almost found ourselves losing out to them in the group but we came through with flying colours."

France, who easily saw off Finland 3-0, will not be seeded in next month's play-offs.