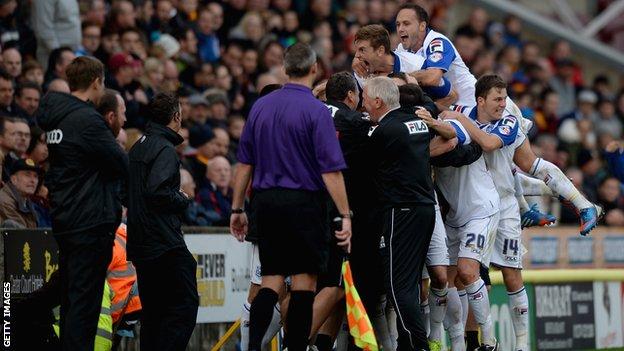 Tranmere boss Ronnie Moore says their second league win of the season - a 1-0 victory at Bradford - was long overdue.

Striker Ryan Lowe scored the only goal of the game, his third strike this season, which lifted Rovers off the bottom of the League One table.

"I've seen this coming. We should have got something at Swindon and we should have beaten Port Vale," Moore told BBC Radio Merseyside.

"Should of or could of doesn't mean a thing, you have to do it, and we did."

Tranmere's only other win so far this season was a 1-0 success at Oldham at the end of August and they have struggled to replicate the form from last year, when they were the early pace setters.

After conceding 17 goals in their first seven games of the season, Tranmere have now only let in four goals during their last four matches.

They face unbeaten league leaders Leyton Orient in their next game and are looking for a first win at Prenton Park since March - a run of eight home matches.

"We've got Leyton Orient to come and like today with the betting we were a million miles away from winning, but we've won and we're more than capable of doing the same," added Moore.

"They've got to lose sometime, they're not going to go all season unbeaten so hopefully it will be us to knock the crown off them."

Summer signing Lowe, who joined after his release by MK Dons, believes their defensive improvement has been the foundation of their performances.

"I scored the goal, I get paid to score goals, but it's not just about me it's about the 11 players out there and the subs that come on," said Lowe.

"We spoke about it earlier in the season. We were conceding a lot of goals and we know it needed to stop as you can't win games.

"We've worked on it ever so hard. It's nowhere near job done, it's a long season and the way we've started has not been good enough by our standards and we know that."