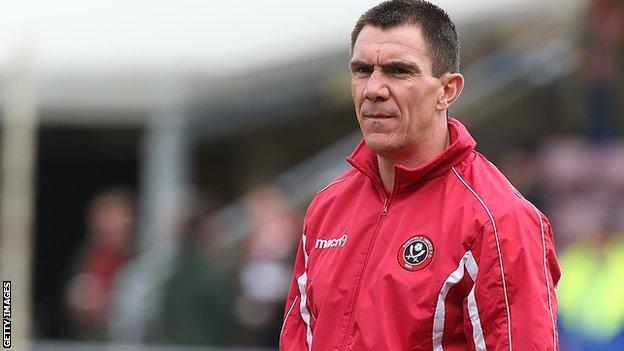 The Blades sacked David Weir on Friday and Sunday's defeat by Coventry saw them drop to the bottom of the table.

"I'm not sure on timescale but I should imagine the club will want to get a new man in as soon as possible," he told BBC Radio Sheffield.

Sheffield United would have to be patient if they really want Nigel Clough to be their next manager.

Clough is still waiting for compensation to be sorted out by Derby County and, although he's the bookies' favourite for the Blades job, I understand Clough wants the financial situation of his four backroom staff to be finalised too.

The process may take some time and there is no indication at the moment that Clough really wants the job.

"We've got a big game against Port Vale on Saturday and the new manager will want time to work with the squad."

Former Derby County boss Nigel Clough is the current favourite for the vacancy.

Clough was sacked by the Rams last month after over four years in charge at Pride Park and, despite their poor start to the season, Morgan believes the club is an attractive proposition.

"If it is Nigel then he's got a fantastic foundation of a football club to work with," he said.

"The infrastructure here is very solid and it is a good job to be coming into at a good time of year.

"We can't keep changing managers here. Coaches and managers can only do so much, it's on the players now."

The Blades have failed to record a league win since a 2-1 success over Notts County in the opening game of the season and are currently three points adrift of safety.