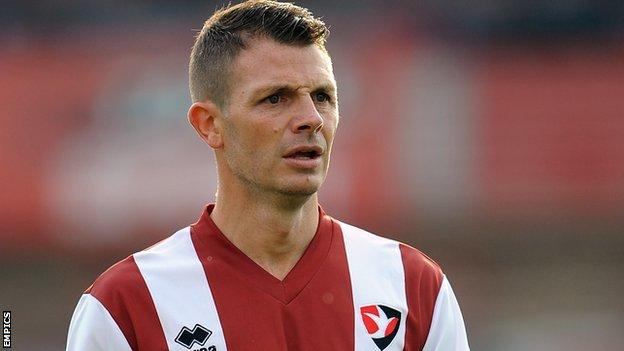 Veteran striker Jamie Cureton says it felt "sweet" to score his 250th career goal and help Cheltenham to a much-needed victory over Dagenham.

The 38-year-old netted his third of the season in Saturday's 2-1 win, which lifted the Robins up five places to 17th in League Two.

"With the position we're in the result is the most important thing," Cureton told BBC Gloucestershire.

"To get the win and the 250th goal makes it that bit more sweet."

It is 18 years and 10 months since Bristol-born Cureton scored his first professional goal, for Norwich against Chelsea in December 1994.

His 250th was a long-range volley after 31 minutes at Victoria Road, and although Abu Ogogo levelled soon after, defender Keith Lowe headed home the winner for Cheltenham.

"I took a touch and it bounced perfectly for me," said Cureton. "I've hit a volley and it's looped over the goalie.

"I take chances regardless so I was always going to hit it. I was quite a way out so there was no way I was going to run that far. I took the chance and it went in.

Cureton started his career at Norwich, and scored his first senior goal 13 seconds after coming on as substitute against Chelsea in the Premier League on 10 December, 1994.

Cureton, making his 718th career appearance, revealed a t-shirt saying '250 baby' during his goal celebration, which earned him a yellow card from referee Keith Hill.

"I didn't take my shirt off, I just wrapped it over the back of my neck," explained the forward. "The ref said if I had kept it in front of me then that would have been it.

"I was worried about it because I only needed to do something silly like stand in front of a free-kick and I would have been red carded. I had to be a bit careful after that."

Cheltenham have reached the play-offs for the last two seasons, but have struggled for form this term, and had only managed two victories from 10 games prior to Saturday's match.

Cureton, in his first season with the club, hopes their win over the Daggers will spur them on.

"The season has been very up and down - we haven't got going at all. But we listed a few things we needed to do and we did all of them - that's why we won.

"The manager said that we need to do it every week, and I think we've got enough quality in the team to see us through."