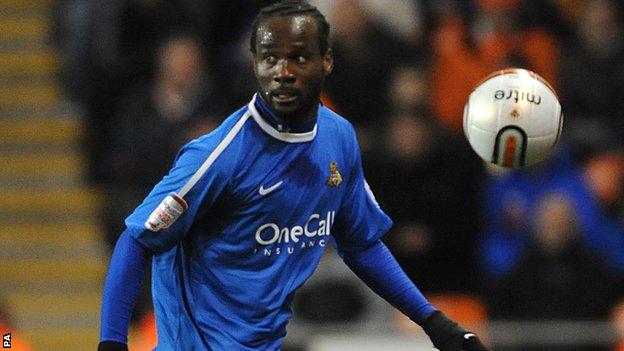 Carlisle boss Graham Kavanagh has asked new signing Pascal Chimbonda to adapt his game to that of a central defender.

He played 90 minutes, ending an 18-month exile from professional football.

The return of Chimbonda

Pascal Chimbonda has made more than 350 professional appearances, but before last Saturday's match at Oldham his previous one came in April 2012 when he played in Doncaster Rovers' 4-0 defeat at Leicester City.

"We want him defending the middle of our goal more because there are times when he thinks too much like a full-back," Kavanagh told BBC Radio Cumbria.

"He's played at such a high level but hasn't played a match for a long time. Considering that, his game understanding was excellent."

Chimbonda, 34, last played in April 2012 when his then club Doncaster Rovers were beaten 4-0 by Leicester City.

Since then he has trained and played friendly matches for non-league sides Market Drayton and Colwyn Bay.

During his 15-year professional career, the Guadeloupe-born defender has played the majority of his football as a right-back, occasionally being utilised in central defence.

"That combination works well and I want it to be the platform from which we can build clean sheets and to be honest, Oldham never cut us open all game."