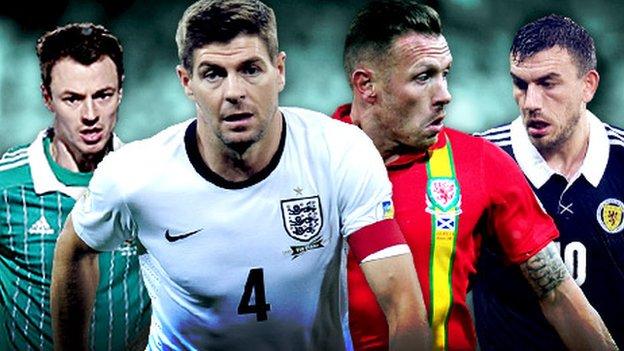 But, 13 months later, only one of the home nations is counting down to a trip to Brazil next summer.

England clinched their place in a fifth successive World Cup finals by finishing top of Group H with a 2-0 win against Poland at Wembley.

However, Wales, Scotland and Northern Ireland fans will be again watching on their televisions after unsuccessful campaigns.

So what have the four nations learned from respective qualifying campaigns? Here BBC Sport picks out nine key points.

England may have suffered 47 years of World Cup hurt, but at least the Three Lions can point to that famous afternoon in the summer of 1966. Unfortunately, there is no such glorious memory for Scotland, Wales and Northern Ireland. Those nations have suffered a combined total of 88 years of hurt - that is how long it is has been collectively since they reached a World Cup finals.

Scotland were the last of the trio to achieve that in 1998, while Northern Ireland have not qualified since 1986. Wales have to go back 55 years until their last appearance in 1958. And so the drought continues.

Group A rivals Scotland and Wales finished fourth and fifth behind Belgium, Croatia and Serbia, with Northern Ireland finishing one point above bottom side Luxembourg in Group F.

The record books will say that England qualified for the 2014 World Cup finals after navigating Group H without being beaten. But many complain it was a campaign which focused on substance rather than style.

Roy Hodgson's men were expected to qualify comfortably, only for their place in Brazil to hang perilously in the balance right up to their final game against the Poles.

Roy Hodgson is a man who has been around the footballing block. The 66-year-old has managed 16 different teams in eight different countries, at both club and international level, during a 37-year coaching career.

He guided an unfancied Switzerland side to the 1994 World Cup and Euro 96, as they reached an all-time high of third in the Fifa world rankings. With that pedigree, it is fair to say Hodgson knows his way around the international scene.

But he has been the target of criticism from England fans for his methodical and cautious approach, particularly in the away game against Ukraine.

So it was a surprise when Hodgson picked uncapped Tottenham winger Andros Townsend in the must-win home match against Montenegro.

It worked a treat. Townsend used his electrifying pace to torment Montenegro's defence, leaving Hodgson with a beaming smile and a sense of justification at his player's performance.

"Roy Hodgson deserves big credit for picking Andros Townsend for such a big game," says ex-England midfielder Peter Reid. "Townsend was outstanding. It was one of best debuts I've seen."

3) Scotland must reignite the Hampden roar

Home has not been where the heart is for Scotland during another doomed qualifying campaign.

Sacked manager Craig Levein boldly claimed that his team was capable of winning every game in Group A, despite the presence of Belgium, Croatia, Wales, Macedonia and Serbia.

Scotland were only ranked above Macedonia when the campaign started in September 2012, with Croatia in ninth position on the Fifa chart and 40th-placed Belgium, containing Premier League stars Vincent Kompany, Eden Hazard and Romelu Lukaku, already being backed to rapidly improve.

But they have not won every match. In fact, they had failed to win a home match before Tuesday's win against Croatia. And that is where the problem lies.

Draws against Serbia and Macedonia, coupled with defeats by Wales and Belgium, leave Scotland with an abject record of five points from five games.

"Our away form is better than our home form and what we have to do is improve our home form if we want to qualify for a tournament," says Levein's successor Gordon Strachan.

4) Wales need to take the burden off Bale

Having the world's most expensive player in your national ranks is always going to be a help. And Wales have the luxury of being able to select Real Madrid's £85m forward Gareth Bale - when he is fit.

The Cardiff-born star played in six of his nation's qualifiers and scored four goals to make him the joint leading scorer in Group A.

But, while group winners Belgium shared the goalscoring burden between 10 different players, only Aaron Ramsey (three goals), Hal Robson-Kanu (one) and Simon Church (one) also netted for Chris Coleman's side.

"With Gareth Bale, we have shown we're an average side. Without him, we're a below average side," says ex-Wales skipper Kevin Ratcliffe.

"The other players feel more comfortable when he's playing, but when he's not playing it maybe brings out other things in the other players. He didn't play against Macedonia at home and the lads didn't have anyone without him to rely on. Maybe when you've got Gareth Bale there you rely on him too much."

Northern Ireland have not reached the finals of a major tournament since the 1986 World Cup in Mexico. But they have produced a few knockout blows to leave some of the world's heavyweights dazed in recent years.

Remember the famous 1-0 win against England in their 2006 World Cup qualifying campaign? Or the 3-2 success against Spain in the Euro 2008 qualifiers?

Despite the overall disappointment of the 2014 campaign, Michael O'Neill's men did manage to produce some memorable nights.

A Russia side which is ranked 16th in the world and managed by Fabio Capello went down to a 1-0 defeat at Windsor Park. A Portugal side containing Cristiano Ronaldo were held to a 1-1 draw on their own patch.

But they also succumbed to embarrassing defeats against Luxembourg - who had not won a home qualifier since 1972 - and Azerbaijan.

"It's a different mindset when you are favourites," says former England midfielder Peter Reid. "That's where the pressure comes on the players and obviously at this moment in time the Northern Ireland lads can't handle that pressure."

It might not have been the prettiest finish, but the importance of Wayne Rooney's 48th-minute goal against Montenegro to England's hopes of reaching the 2014 World Cup was glaringly obvious.

But it also held personal significance for the Manchester United forward. The deflected six-yard strike, which squirmed under the body of Montenegro goalkeeper Vukasin Poleksic, was Rooney's 27th competitive goal for England - taking him past Michael Owen as the nation's top scorer in World Cups and European Championships.

Owen netted 26, ahead of Gary Lineker (22) and Alan Shearer (21). England's all-time record goalscorer Bobby Charlton is way down the list, behind Steven Gerrard and Frank Lampard, with 14 strikes of his 49 coming in competitive games.

After a summer of personal problems, not to mention the nasty head wound which forced him to miss England's previous two qualifiers, Rooney returned against Montenegro to prove he is still their most potent weapon.

However, Rooney, who added a 28th against Poland, acknowledges he has not achieved on the greatest stage of them all. He has still never scored in a World Cup finals after eight appearances. "I want to score goals in the World Cup because I've not done that yet," he says.

While England know they can depend on Wayne Rooney, the other home nations do not have the luxury of a proven goalscorer. Scotland could do with a Kenny Dalglish. Wales would love an Ian Rush. Northern Ireland need a David Healy.

The Scots managed just eight goals from their 10 fixtures, while Northern Ireland and Scotland were marginally more potent with nine each.

Scotland boss Gordon Strachan freely admits he is struggling to find a system that suits his striking options, as he copes without injured Sunderland forward Steven Fletcher.

Wales may have Gareth Bale, Aaron Ramsey and Joe Allen creating opportunities from midfield, but they are not being provided with a cutting edge from the Championship strikers, including Charlton's Simon Church, Burnley's Sam Vokes and Millwall's Steve Morison, at their disposal.

However, they may take solace from the peculiar case of Northern Ireland's Healy. The 34-year-old, who is currently unattached and out of the international set-up, was hardly a prolific goalscorer for Preston, Leeds and Fulham but single-handedly almost fired his nation to the Euro 2008 finals.

"Healy got 13 goals in one campaign - it's unheard of really," says ex-Northern Ireland striker Iain Dowie. "Any team is as good as their front players."

Chances are your average England supporter did not recognise the face of Andros Townsend when he lined up alongside his more illustrious team-mates to sing 'God Save The Queen' before Friday's victory against Montenegro.

Fast forward two hours and everyone was aware of the Tottenham winger. The 22-year-old made his international bow after finally breaking through under Andre Villas-Boas this season.

Will he light up the international stage against better opposition than Montenegro, who only came into existence in 2006 and were missing a host of key players? Time will tell.

But his impressive display did give hope that maybe, despite the gloomy figures, there are some talented young players ready to make the breakthrough.

Everton midfielder Ross Barkley, 19, has recently been elevated to Roy Hodgson's squad, while West Ham's Ravel Morrison, 20, and Aston Villa's Fabian Delph, 23, are being talked up by their club managers.

Failure to the qualify for next summer's World Cup in Brazil is still painfully raw for Scotland, Wales and Northern Ireland. But there is an opportunity for redemption just around the corner.

That's because the next European Championship finals, which will be hosted by France in 2016, has been expanded from 16 to 24 teams.

Scotland last competed in 1996, Wales have not appeared since 1976, while Northern Ireland have never qualified. Even the most success-starved football fans cling on to hope - and the dreams of Scotland, Wales and Northern Ireland ending their barren runs have been boosted by the new format.