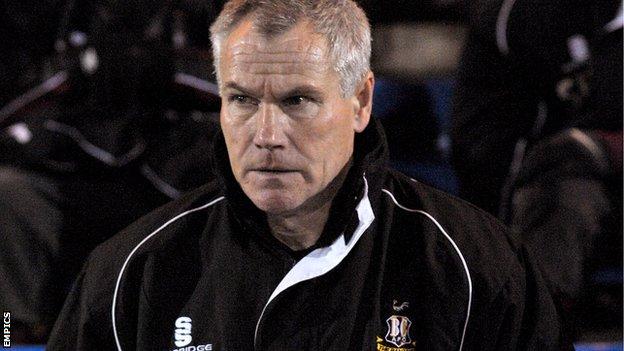 In a statement on the club website, chairman Paul Scally said the search for Allen's replacement was "clearly going to take some considerable time".

His number two John Schofield had been placed in temporary charge, but Scally spoke to Taylor on Monday afternoon and he agreed to return to the Priestfield Stadium in a caretaker capacity.

"He will take responsibility for the team with immediate effect," the chairman said.

"He will take charge of our game against Preston on Saturday and thereafter until a permanent appointment is made."

After a playing career highlighted by spells at Crystal Palace and Tottenham, and which brought him four England caps, Taylor moved into management with non-league Dartford in 1986.

He moved on to Southend and Dover before beginning the first of two spells in charge of England's Under-21 team.

His one season at Gillingham ended with victory in the League Two play-off final, after which he accepted an offer from Leicester City.

Following the departure of Kevin Keegan, he also filled in as acting England boss for a game against Italy in November 2000, and named David Beckham as captain, but they were beaten 1-0.

Taylor was sacked by Leicester in 2001 and his managerial career then took him to Brighton, Hull, Palace, Stevenage, Wycombe and Bradford prior to a spell lasting just over a year as head coach of Bahrain's national team.

In March of this year, he was given a contract as England Under-20 boss, but they were knocked out of the World Cup after finishing bottom of their group and failing to win a match.

Taylor takes over with last season's League Two champions 17th in League One, having won only two of their 11 games this term.

Their next game is at home against Preston on Saturday and Scally appealed to fans to accept that the decision to part company with Allen was taken in the interests of the club.

He added: "I hope you will all unite as always behind the team on Saturday and give Peter the welcome and support one would expect."