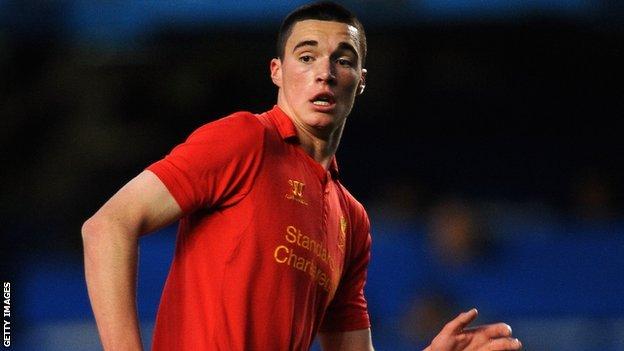 Liverpool Academy defender Lloyd Jones has rejected a possible Wales future, telling them he wants to play for England instead.

Wales Under-21 manager Geraint Williams made the announcement ahead of their Euro 2013 qualifier against San Marino on Tuesday.

Jones, who joined Liverpool from Plymouth in 2011, has played for Wales at Under-17 and Under-18 level.

"Lloyd has made it clear he wants to be picked for England," Williams said.

"He's not made himself available for Welsh selection.

"He's decided, whether he's talked with agents or somebody else, [that] his career's moving on at Liverpool and he feels he's got a chance of representing England.

"To be fair to Lloyd he was born in England and his dad is a very proud Welshman.

"We had the conversation [about] where his heart lay and could he fully commit to Wales. If he couldn't then I didn't want him here."

His decision comes in the wake of Williams stating that striker Tom Bradshaw is no longer available to Wales after instead of playing in on Friday.

Wales U21 take on their San Marino counterparts at Bangor's Book People Stadium with a 14:00 BST kick-off.