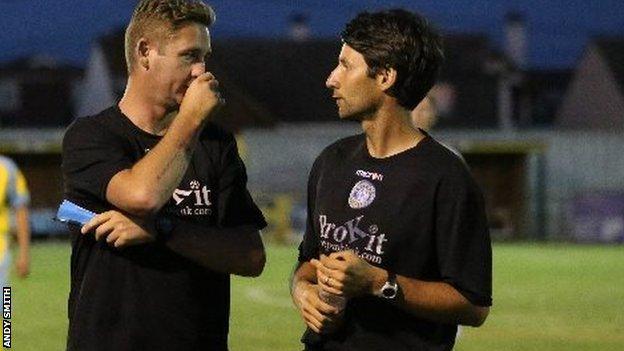 PE teacher Danny Cowley has said he will take his autograph book when his Concord Rangers side face Edgar Davids' Barnet in the FA Cup.

Former Netherlands international Davids is player-manager for the Bees, who will host Conference South Concord in the fourth qualifying round.

"I said at the beginning of this season I was going to take my autograph book to most games," Cowley told BBC Essex.

"With Edgar I'll be able to add another good autograph to that book."

Concord won promotion to the Conference South last season and have reached the FA Cup fourth qualifying round for the first time in their history to be one game away from the first-round proper.

Davids, 40, was a star of European football with a career which included spells at Ajax, Juventus, Barcelona, Inter Milan and Tottenham, and he is currently manager and captain at Conference Premier Barnet.

Cowley is head of PE at FitzWimarc School in Rayleigh and has won three promotions with the Beachboys since taking over in 2007.

"We were in the Essex Senior League six years ago when Edgar left Spurs. There's quite a lot of difference," said Cowley.

"I'll look forward to comparing careers with him before the game. We've come a long way in a short time.

"What's important now we're playing at this level is we learn fast. And there's not many better to learn from than somebody with Edgar's experience."