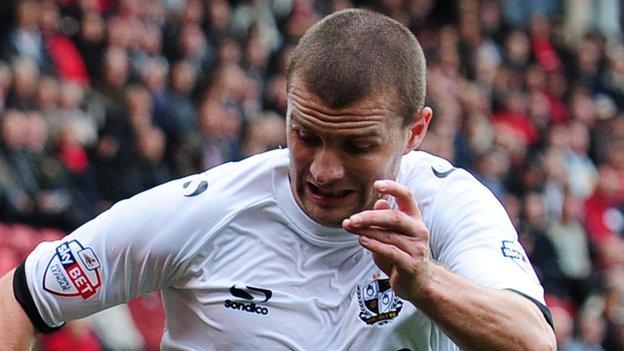 Port Vale utility man Carl Dickinson is keen to win back his place after picking up an automatic one-match ban.

The 26-year-old former Stoke City left-back has been an ever present for Vale this season, occupying several roles.

But he will lose that record when Vale visit Sheffield United this weekend, having clocked up his fifth booking in Saturday's defeat by Peterborough.

"I didn't think it was a booking, but I have to take it on the chin. Now I just want a chance to get back in," he said.

"It's all about competition for places." he told BBC Radio Stoke.

Prior to Saturday's 1-0 home defeat by high-riding Posh, summer signing Dickinson had been used by Vale boss Micky Adams at centre-back before being switched to his more customary role at left-back when Daniel Jones got injured.

But, when the fit-again Jones returned to League One action on Saturday for the first time in over a month, Dickinson was again redeployed on the left side of a four-man midfield diamond formation.

Now following his first-half confrontation with Posh midfielder Danny Swanson, for which Dickinson was considered unlucky to be booked, he will be forced to miss Vale's trip to Bramall Lane.

"In a way, we made it my type of game on Saturday," added Dickinson. "In their faces, getting in tackles.

"It's disappointing, especially what the booking was for. But now I've just got to work hard to get back in and wherever the gaffer wants to put me I'll give everything."