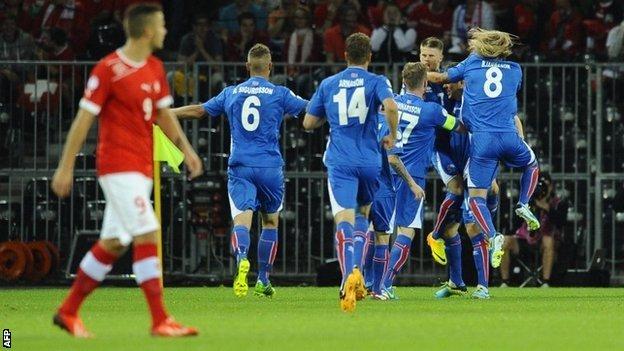 Iceland are ready for the "most important game" in their history when they visit Norway in World Cup qualifying Group E on Tuesday.

The Nordic nation, who have never reached a major tournament, would seal a play-off place with victory in Oslo.

A draw or defeat would be enough as long as Slovenia do not better their result when they face Switzerland.

"It will be the most important game we have ever played," Cardiff midfielder Aron Gunnarsson told Uefa's website.

"We are young and do not scare easily. We have already put pressure on ourselves and now we just have to handle it."

Iceland coach Lars Lagerback said: "We have to go for victory but we can also benefit from other results. We will of course hear what is going on between Switzerland and Slovenia, and if it's good news we will try to be more careful."

If Iceland do reach the play-offs, they will face a seeded team - which could be Portugal or France.

Tottenham midfielder Gylfi Sigurdsson said: "Now this is all about what we do.

"We do not expect any favours from Switzerland, and it is great to go and have a shot at the play-offs. That has been our goal for the whole competition, but now we have to get down to work and be ready for Norway."