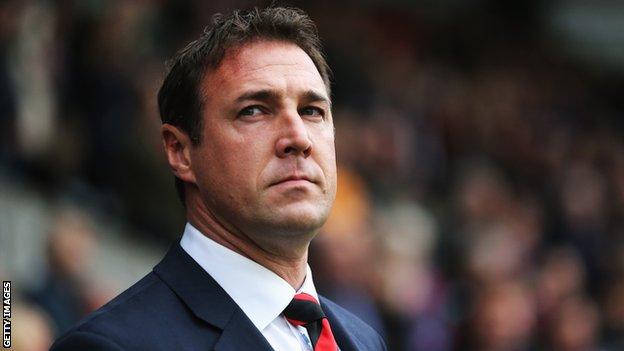 Malky Mackay is not planning to step down as Cardiff City manager, according to his agent Raymond Sparkes.

Mackay met the club's board on Monday after the removal of his head of recruitment Iain Moody last week.

When asked if Mackay would quit, Sparkes told BBC Radio Wales: "No, absolutely categorically not. That's not something Malky is contemplating.

"There is absolutely no prospect of Malky resigning from a job that he loves, a job he's ensconced in."

Sparkes added: "Malky loves being at Cardiff City, has started a job there and feels that he's been given the opportunity to kind of be the architect in some respects of a new Cardiff City.

"But football is a precarious business and Malky's decision to stay might not thereafter be matched by all the powers that be deciding that he should stay, so in some respects that's pretty much in the hands of other people."

On Friday, Mackay was publically backed by City owner Vincent Tan after Moody was first suspended and then left the club.

Moody has been succeeded by Kazakh Alisher Apsalyamov, who was on work experience at the club in the summer and who is a friend of owner Vincent Tan's son.

Sparkes admitted the manager is clearly unhappy about the situation.

"Malky's feeling a little bit bemused and a good bit frustrated and certainly concerned," he said.

In Mackay's first season in charge Cardiff reached the Championship play-offs, but lost to West Ham in the semi-finals

"He has been concerned for the club itself in terms of what this would mean to the club and also for the Cardiff City fans, who he feels have really not had anything said to them that has been so meaningful.

"Hence the reason for Malky and I deciding that perhaps it was time to give a perspective back to the fans that Malky is concerned about the club situation and concerned that the fans had been kept pretty much in the dark - and he wanted to do something about that."

Sparkes also revealed that Mackay and Tan had already been in talks over Moody's exit.

"Both men have made their positions quite clear but Iain has still been removed from his position and that's not going to change," Sparkes added.

"The real question is how do we go forward from here, how do we get things back on to an even keel and not only have a plan for taking the club forward but convince the Cardiff City fans that it's something that they can absolutely rely on and trust in going forward.

"Iain was a crucial member of Malky's team and for anyone who knows Malky or has come into contact with him, he is a tremendous character in every respect.

"No-one will be surprised to hear that when a member of his family, if that's what we can call him, has been removed, then Malky on complete morality grounds is always going to jump to the defence of that individual."