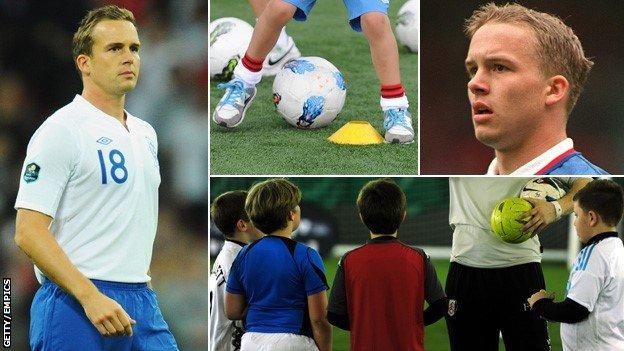 Kevin Davies is a veteran of 446 Premier League appearances accumulated over 14 years at Southampton, Blackburn and Bolton, as well as winning England recognition - at the age of 33 - in 2010.

Following last week's announcement of the make-up of the commission established by Football Association chairman Greg Dyke to improve the prospects for English football, the 36-year-old striker, now at Preston in League One, offers his own analysis of current failings in the game.

I have witnessed a lot of academy football over the past two years as my son is playing for Bolton Under-10s, but standing on the sidelines I sometimes wonder whether these boys are really enjoying themselves.

Not only do they have their coach to impress but their dads, too, who I sometimes sense want it more than their sons. These parents will know when a scout from a top club is around and the son will have had lots of 'encouragement' to perform to their best, shall we say.

I have seen players reduced to tears by the pressure and even unable to play. All this before they are 10 years old.

The parents want their child to succeed, as we all do, and pursue their dreams of becoming a professional football player. There's nothing wrong with that - but kids need to be kids. It is a tough world so let them have a few years without the added pressure to succeed on the football pitch.

If they are good enough and have the right attitude, they will succeed in the end.

When my own hopes were dashed, I was released from Sheffield United's school of excellence at 15, I was heartbroken. I got released this year from Bolton at 36 and it still makes you feel like a failure and a let-down to your family. But kids are now being rejected from as young as seven and eight. That does not sit well with me.

And as for scouts snapping up players as young as five years old? Please. Run the academies like the schools of excellence back in my day. Let them play for their local teams and schools until they at least get to senior school.

Why am I telling you this?

Well, amid all the talk about how to improve English football, I wonder whether we are losing sight of some key issues. And I'm also concerned what part money is playing in motivating parents and young footballers.

It is hard not to think that the Premier League and its riches are at the root of the problems with our youngsters of today.

Yes, it has injected £320m into its Elite Player Performance Plan and this will help no end. Academies will be graded so the best will play with the best but with catchment areas abolished, I hope we can still make it fun as parents drive miles and miles to take their sons to training.

Bolton's academy has players from all over the North West now. I am not sure how they ended up at Bolton and I don't imagine a young boy from Liverpool dreams of playing for them.

I don't see anything wrong with lads doing this but I always felt kids grew up wanting to play for their home team. Now it appears they will travel anywhere four times a week to play for a club.

I grew up less than a mile from Bramall Lane on one of Sheffield's biggest council estates and always dreamed of wearing the red and white stripes of Sheffield United - not for the financial gain, to become famous or to be able to move off the estate, but just because I loved playing football.

Does a boy growing up now dream of playing for his local team or is it just to make it with any team and become very wealthy?

I find it staggering that English football has sat back and watched the number of homegrown players in the Premier League decrease from 72% in 1992 to the current 31%.

I believe a lot of it is down to the number of quality coaches.

This week, I listened to a great speaker and I will tell you a short version of one of the stories he told me.

I remember vacuuming the corridor at Chesterfield in my first few weeks as a YTS before a home game. I was called down and told I was on the bench. I came on and made my debut and then returned to my vacuuming

A group of educational experts, including psychologists, were called in to do a study at a problem school. There were 300 kids in the school who were all underachieving and discipline was a real problem, but from among them the experts identified six geniuses who they predicted would end up with the best exam results.

The teachers' ears pricked up when they were told their names and at the end of the year, sure enough, the six kids finished top of their classes. They called the experts back to discover how they had spotted them and, to their surprise, were told the six were selected at random.

I found this both interesting and worrying. The implication was clear: the teachers obviously worked a lot more closely with the so-called geniuses over the school year and they improved drastically in consequence. But what about the other 294 students?

I think you can compare this with the academy system in football. Bolton's scouting system has focused all its attention on 11 'geniuses' in the under-10 age group, hand-picked from around the North West.

But what about the 850 other players playing in 77 teams in the under-10s Bolton and Bury League alone? I know Bolton - and other academies - run satellite training sessions in their areas but surely it would be in the best interests of a club to work on developing more than one team?

The experiences of my own son serve as a case study.

Two seasons ago I asked the head of Bolton's academy, Jimmy Phillips, if my son could attend some training sessions as he was playing for a local team whose manager was a nice guy but who, in all honesty, knew nothing about football.

Uefa A licence coaches by country

Within weeks he blossomed. My son improved technically and his confidence grew just by having an extra three hours' quality coaching each week. This is a great example of where FA chairman Greg Dyke needs to start tackling the problems with English football - at grassroots level.

Isn't this what we all want to see rather than forking out millions of pounds on foreign imports? It will also create more coaching jobs and give local kids a better chance of making it at their local clubs.

So the first thing Mr Dyke needs to do is make the coaching courses more affordable and accessible and then we can begin to get a similar number of high-quality coaches to our European rivals.

My final point also concerns the effect of money in the game - the money that comes with success.

A long contract worth millions of pounds is obviously going to shape a young man's personality. Does this affect our upcoming generation of footballers? Of course it does. I'm sure money was not what drove the boys of 1966 on to win the World Cup; it was pride.

Many young players do end up dropping out of the game, so let's at least make sure that they are taught some valuable lessons about hard work and respect in the meantime

I do not think a lot of football players today love the game. They see it as a means to an end. So how do you keep motivating these young boys who are earning vast sums of money at such a young age?

Having money can go to your head, I have been there, but rather than a wage cap, how about limited access to the money until they are 25?

I think the clubs need to look at how the youngsters learn about respect too.

The youth scholarship programme has been reshaped to ensure the kids get more time out on the pitch - which is great. What we have lost, though, is the grounding experience that the Youth Training Scheme (YTS) - as it was in my day - provided.

I remember vacuuming the corridor at Chesterfield's Saltergate ground in my first few weeks as a YTS one Saturday before a home game. I was called down into the home dressing room and told I was on the bench. I came on and made my debut at 16 and then returned to my vacuuming after the game.

That process of "learning my trade" continued until I signed professionally at 17, and I see it as valuable experience that I have carried through my career. I learned so much just by being around the senior pros but in my last few years at Bolton I rarely saw any of these young scholars. They trained miles away at their lovely academy.

It would surely be more inspiring to be around your idols, watching how they carry themselves. What tempo do they train at? How technically good are they? Do they stay behind afterwards and work on their weaknesses?

Of course the reality is that many young players do end up dropping out of the game, so let's at least make sure that they are taught some valuable lessons about hard work and respect in the meantime.

If they do not make it, they can leave the bubble that footballers live in as nice, hard-working young men with high standards and good morals.