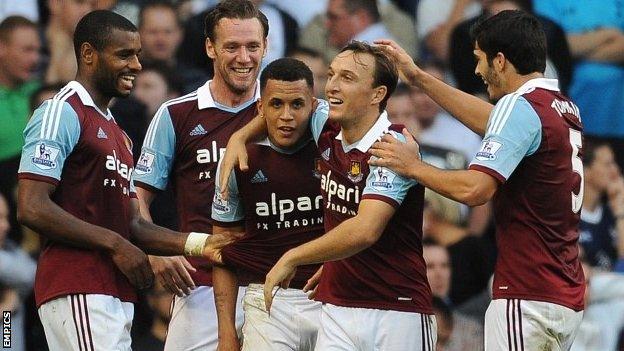 When Ravel Morrison danced through the Tottenham defence to score a sumptuous goal for West Ham at White Hart Lane recently, it was hard not to be moved by his team-mates' reaction.

There is a great picture (above) which shows Kevin Nolan, Mark Noble and others congratulating the attacking midfielder with beaming smiles as he looks slightly sheepish while being cradled among them.

For Nolan and Noble, there is understandable pride as they have taken the 20-year-old under their wing since he joined the Hammers in January 2012 - and Morrison's facial expression suggests he now realises the magnitude of what he can achieve in the game.

The road to this point has often been a fraught one, though, and but for the mercy of a judge he could easily have been sent to a young offenders' institute.

After exciting so many at his previous club Manchester United, the wider public is now beginning to witness his talents.

So why has it taken so long to see what Morrison can offer on the big stage?

His poise and skill with the ball have never been in question - but issues away from the pitch have clearly hampered his progress.

Turning up late to training or not turning up at all led to rows with his coaches, while a questionable choice of friends often led Morrison - from the Wythenshawe area of south Manchester - into trouble.

It seems a loan spell at Birmingham last season and careful guidance from new mentors appear to have had a positive effect. There are also suggestions that the motivation of appearing for England at the World Cup in Brazil next summer may have made him knuckle down.

Initially, problems continued when he arrived in London last year but West Ham captain Nolan says "it was like he was a new man" after he returned from his spell in the Championship.

Morrison has publicly thanked Birmingham boss Lee Clark for the part he played last season - the former Newcastle midfielder says he talked to Morrison about his own mischief-making while growing up on Tyneside.

Clark, 40, told BBC Sport: "When he arrived at Birmingham at the start of last season it was probably at the stage where Ravel realised himself that whatever club he was at, he had to start behaving in a way befitting of a top-class footballer.

"His ability ticks all the boxes but you look at the group of England players that are taking us to the Brazil World Cup now - they are top-class international footballers, and it's about following their lead.

"I stressed to him all the time that what you do on the pitch is not enough. You've got to be the full package - and there were several times when I sat him down with me and my staff and explained what he could achieve in the game.

"He has responded to that."

Quite why similar guidance from former Manchester United boss Sir Alex Ferguson did not have the same effect is something only Morrison can explain.

But Professional Footballers' Association chief executive Gordon Taylor says it is to the Scot's credit that despite developing some of Britain's finest players - including Ryan Giggs, Paul Scholes and David Beckham - he recognised it was time for Morrison to move on.

In May 2011 Morrison was fined £600 for criminal damage after admitting throwing his girlfriend's mobile phone through a window during an argument. The prosecution accepted his not guilty plea on a count of assault.

Three years earlier, he had been given a caution for common assault.

And in 2011, just before he turned 18, Morrison admitted two counts of witness intimidation.

Trafford Youth Court heard that Morrison and two of his friends had threatened a teenager who had been robbed at knifepoint by two others - described in court as friends or associates of Morrison - in September 2009.

Ultimately, the judge decided not to detain Morrison, instead suspending the 12-month custodial sentence.

Taylor, who offered support to Morrison when he was in trouble with the law, said: "It's probably fair to say the move [away from Manchester] has helped in the process. As is normal with Sir Alex, he knows enough about his players and from that point of view, they look to have done Ravel a favour.

"It's encouraging to see him repay the faith that so many people have had."

It is still early days in Morrison's career and his history means he must be judged with caution. It is understood Manchester United do not have a buy-back option. He has only made eight West Ham appearances and on his full debut for England Under-21s against Lithuania on Tuesday he scored twice but then got into a scuffle with team-mate Wilfried Zaha.

Nevertheless, there is a sense that at a club like West Ham - where the spotlight is softer - and with advice from the likes of Nolan and manager Sam Allardyce, he can develop into a player better known for his capabilities on the pitch.

Nolan said: "Me and Mark Noble have had big, long chats with him and we try to protect him. We will continue to do that. Obviously we are going to be excited about his talent because it's frightening, but it's about nurturing him now."

West Ham midfielder Joe Cole, who has 56 England caps, knows all about dealing with the pressure of being hailed as a future star.

He believes Morrison can make his way into Roy Hodgson's England squad for next year's World Cup.

The 31-year-old told BBC Sport: "He can go on and achieve massive things in the game. He's a top lad as well. He wants to learn and that's the main thing. He's on a good run of form and he just wants to keep his head down and keep going."

Clark is more circumspect. He added: "If Ravel continues the way he has started the season with West Ham and the Under-21s, he will be in Roy Hodgson's thinking because he has the ability to change a game in a second."

Other than Morrison himself, there are no barriers to his progress - and the signs are that he is beginning to mature.