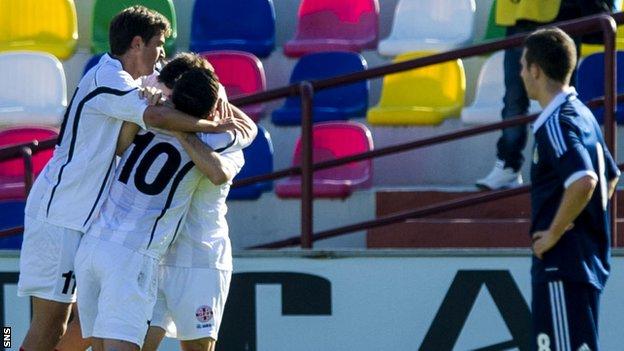 Scotland Under-21s suffered another blow to their hopes of qualifying for the 2015 European Championship finals with a narrow defeat in Georgia.

Billy Stark's side had lost 4-0 away to the Netherlands between wins over Luxembourg and Slovakia in Paisley.

Tottenham Hotspur goalkeeper Jordan Archer had saved a penalty moments before the Rangers player's strike but he could not prevent Georgia taking the three points that pulls them level with Scotland and Slovakia on six points.

Stark made only one change from the team that started in last Thursday's 2-1 home win over Slovakia, with Hearts midfielder Jason Holt replacing Macleod.

And Stark's men started well in the Mikheil Meskhi Stadium and came close to an eighth-minute opener when Dylan McGeouch hit the post after Dundee United midfielder Stuart Armstrong had a shot parried following good work from Stevie May.

However, Georgia then had some good spells of possession without testing Archer.

Armstrong and May combined again midway through the half with the United midfielder this time playing in the St Johnstone striker, but May could not get enough power in his shot and Giorgi Nadiradze saved.

Scotland then came under pressure and Archer made an excellent save to stop Jigauri converting at the near post.

Giorgi Kvilitaia blasted over after a corner before Georgia took the lead through Kazaishvili's well-placed shot.

Archer made second-half saves from Kazaishvili and Giorgi Chanturia but the Spurs goalkeeper was beaten again with 20 minutes to go when Jigauri netted from 20 yards following good work from Kazaishvili.

Matters got worse for Scotland when Celtic defender Stuart Findlay was ruled to have used his arm in a penalty box challenge and the referee pointed to the spot.

Chanturia converted the initial penalty but a re-take was ordered and Archer dived low to stop the second effort.

That sparked a Scotland fightback and Macleod pulled one back two minutes later when he fired home from 25 yards.

The Scots pushed for an equaliser but Aberdeen full-back Clark Robertson had a close-range shot saved and Hearts defender Jordan McGhee headed over from an injury-time corner.