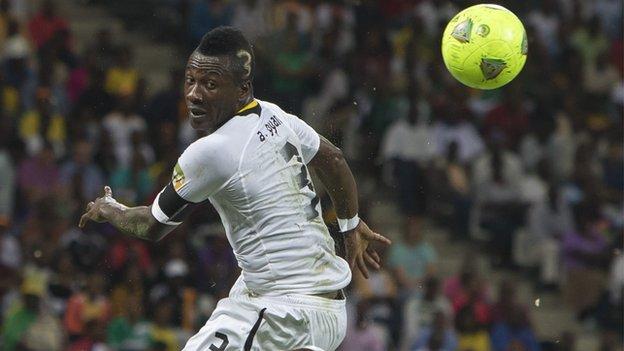 Ghana took a huge step towards reaching their third straight World Cup finals by thrashing Egypt 6-1 in the first leg of their 2014 play-off.

Asamoah Gyan thumped in the opener and it was 2-0 after Michael Essien's run led to an own-goal from Wael Gomaa.

Egypt's Mohamed Aboutrika scored a penalty but Majeed Waris headed in to make it 3-1 and Gyan headed another.

A Sulley Muntari penalty and a late strike by Christian Atsu put Ghana in total control of the tie.

The match had been billed as the tightest of the five African play-off ties that will decide who will make it to next year's tournament in Brazil.

But it is now almost guaranteed that the Black Stars will be on the plane to South America after a huge win in Kumasi.

The tension had been ramped up during the build-up to the tie because Ghana had written to Fifa asking for the 16 November second leg to be switched from the Egyptian capital Cairo because of safety fears.

With the venue for that match still uncertain, Ghana wanted to earn a healthy advantage from the first game at home and they set about achieving it by sprinting out of the blocks at the Babayara stadium.

Gyan had a clear chance to put the hosts ahead inside 20 seconds but he hit his shot straight at Egypt goalkeeper Sherif Ekramy from 12 yards out.

The Black Stars skipper had only a few minutes to dwell on his miss before he was put when Waris touched on Essien's pass and the former Sunderland striker turned with pace and struck a smart low shot into the far left bottom corner.

Egypt, who came into the game with a 100% record in qualifying - the only African side to do so - appeared stunned and despite having nine players from the same club, Al Ahly, were totally disorganised.

Kwadwo Asamoah let fly with a fierce drive that was beaten out by Ekramy and shortly after the Egyptian keeper made another fine save, diving low to his left to push out Waris's header, as Ghana threatened to completely dominate their opponents.

A second goal looked inevitable and it came after Essien left two defenders on the floor during a mazy run and, just as the Chelsea man appeared to have tried too much, the ball ricocheted off Gomaa into the Egyptian skipper's own net.

At that point, Ghana were firmly in control and making light of the fact they were without injured midfielder Kevin-Prince Boateng and first-choice centre-backs John Boye and John Mensah,

Gradually, though, Egypt acclimatised to the woefully bumpy pitch and slippery surface that had been affected by heavy rainfall before kick-off.

And when Mohamed Aboutrika's whipped free-kick to the back post found Mohamed Naguib, the central defender should have done better than to head over.

It was the first encouraging sign for Egypt and soon Mohamed Salah gave warning of his pace by forcing a foul from Rashid Sumaila. When the pair tangled again soon after, the referee awarded a penalty against the inexperienced Ghana centre-back for what looked a clear push.

Aboutrika, capped 101 times by his country, drew on his experience to kept his cool and stroke the ball home, sending the keeper Fatawu Dauda the wrong way to make it 2-1.

However, any sense of a recovery from Egypt was soon dispelled when Waris restored Ghana's two-goal advantage on 44 minutes, heading in Muntari's cross.

Eight minutes after the interval, things got even worse for Egypt when they failed to clear a corner and Muntari's bicycle kick attempt bounced up nicely for Gyan to nod in Ghana's fourth goal.

The visitors, who have somehow managed to achieve spectacular results despite severe disruptions to their domestic league in the last 18 months, looked a well beaten side for the first time in this qualification campaign.

And their misery was increased when the speedy Waris burst through on goal and was upended in the penalty area by keeper Ahmed Elshenawi, who had come on for the injured Ekramy. Muntari made no mistake from the resultant spot-kick.

Egypt's humiliation was complete when substitute Atsu drove in a fizzing shot from the edge of the box to increase the fervour of the home fans' celebrations.