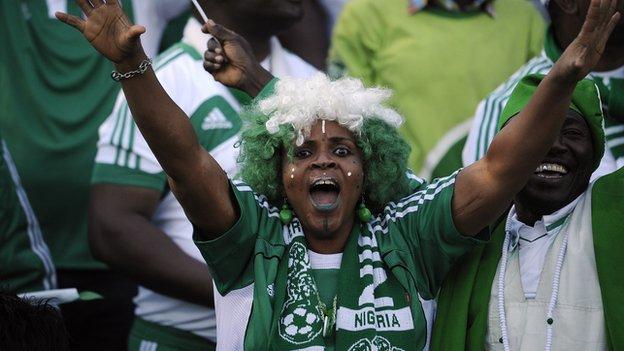 Nigeria will play Italy in a friendly at Fulham's Craven Cottage stadium in London on 18 November.

Nigeria won the first leg 2-1 on Sunday and are now fancied to complete the job at home in Calabar on 16 November.

The Super Eagles hope the match against Italy will be preparation for next year's tournament in Brazil.

The match, which will kick-off at 1945 BST, will be Super Eagles coach Stephen Keshi's first friendly game against European opposition since he took charge of the the side in November 2011.

Jairo Pachon of Eurodata, Nigeria Football Federation (NFF)'s official match agent, told BBC Sport: "The aim is to play one of the top five or 10 teams in the world before the end of the year.

"I'm glad we could secure an important friendly and big opponent for Nigeria. Italy are number four in the world and that says a lot.

"It's also an important opportunity for the Nigerian community in the UK to see the African champions in action."

Meanwhile, the NFF also confirmed another friendly for their locally-based team who have qualified for the 2014 CHAN tournament in South Africa.

"We are also happy to confirm a match for our Super Eagles locally-based team against Jordan in Omman on the 28 October," NFF spokesman Ademola Olajire told BBC Sport.

"This match that will serve Jordan to prepare for their World Cup play off match against Uruguay will also help Nigeria to prepare for next year's African Nations Championship."