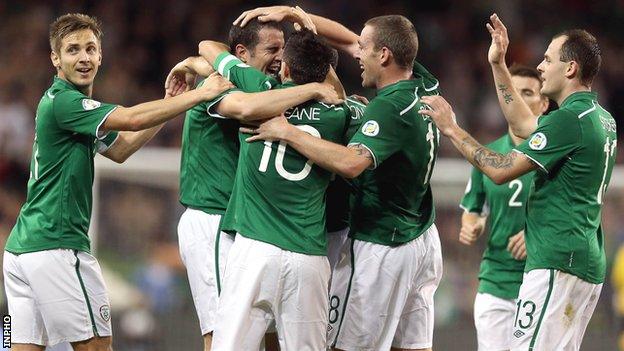 Republic of Ireland finished fourth in their World Cup qualifying group after a low-key home victory over Kazakhstan.

A stunning strike from Dmitriy Shomko put the visitors ahead but the hosts hit back with a Robbie Keane penalty and John O'Shea's close-range finish.

Republic midfielder Darron Gibson was carried off with a knee injury before the Irish took control.

Shomko turned a cross into his own net as Noel King ended his brief stint as Republic interim boss with a win.

Keane does it again

King, who has stepped in following the sacking of Giovanni Trapattoni, made four changes from the 3-0 defeat by Germany including the return of skipper Keane and Andy Reid's first international appearance since 2008.

In front of a sparse Aviva Stadium crowd, the Kazakhs were first to threaten when Maksat Baizhanov beat keeper David Forde to a cross but the midfielder headed over.

It was brief reprieve for the Irish as Shomko, taking advantage of poor Seamus Coleman clearance, struck a superb angled shot into the net from 25 yards after 13 minutes.

But the Republic's response was impressive, Keane equalising from the spot three minutes later after Aleksandr Kislitsyn's clear handball from a Reid free-kick.

The hosts moved in front on 26 minutes, with keeper Andrei Sidelnikov failing to hold Richard Dunne's header from a Reid corner and O'Shea was perfectly placed to stab home his first international goal for 10 years.

Everton midfielder Gibson left the field off eight minutes from the break with suspected knee ligament damage after landing awkwardly when making a tackle.

The Republic dominated the opening stages of the second half without turning their possession into clear-cut chances.

Kazakhstan rarely threatened although Igor Yurin flashed a long-range effort wide before Reid spotted Sidelnikov off his line and attempted an audacious 35-yard chip which found the roof of the net.

Aiden McGeady set up Ireland's third on 77 minutes, the substitute bursting into the box and Shomko, Kazakhstan's scorer, turned the ball into his own net as he attempted to clear the winger's low cross with Keane ready to pounce.

The Republic started and finished the campaign with victory over the Kazakhs, but it was poor results in between, particularly a hammering by Germany and two defeats in five days last month, which ended their hopes of making the finals and also resulted in the departure of manager Trapattoni.

A new manager will be place well before the Euro 2016 qualifiers with former Republic boss Mick McCarthy and Martin O'Neill among the contenders.