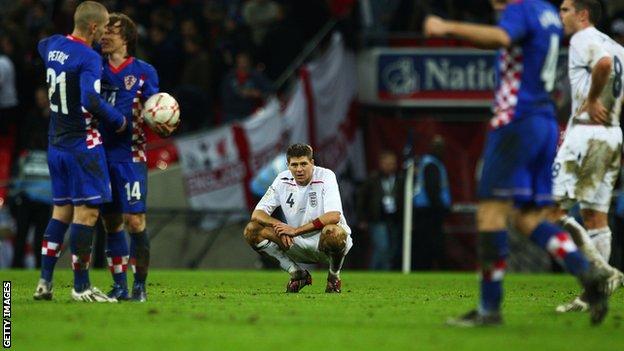 England captain Steven Gerrard will use the "haunting" memory of failing to reach Euro 2008 as motivation in their World Cup qualifier against Poland.

Roy Hodgson's side must beat the Poles to guarantee progress to Brazil 2014.

A 3-2 home loss against Croatia knocked England out of Euro 2008, their last failure to reach a major tournament.

"The Croatia game is a memory you will never be able to eject and that's why it's important we seize this moment," said 33-year-old Gerrard.

Since the 3-2 defeat to Croatia in 2007, England have lost just two competitive matches in normal time. A 1-0 defeat to Ukraine in qualifying for the 2010 World Cup and the 4-1 loss to Germany at the tournament.

"The memories are very different when you look back," added Gerrard. "The Croatia night and experience haunts you for a very, very long time.

"When Roy first called me over the captaincy and gave it to me full time, the job was to lead the lads into Brazil and it would be a huge satisfaction for me if we do it."

England beat Montenegro 4-1 on Friday and the team are unbeaten in nine matches since losing to Sweden last November.

Hodgson's side top Group H with 19 points, one ahead of Ukraine going into the final round of matches. However England will need to win as Ukraine meet minnows San Marino, who have never won a qualifier.

"It was a fantastic performance against Montenegro and it was important we enjoyed it but it's gone now and we need a similar effort against Poland," said Gerrard, who created Wayne Rooney's opener when the sides drew 1-1 in Warsaw.

"I'm confident we can produce the same but it's a lot different being confident to going and doing it.

"I'll be very surprised if our players show complacency, we know how important this game is."

Unlike that night at Wembley six years ago, England will compete in the play-offs if they fail to secure top spot in the group.

Hodgson's side would then face a two-legged tie against one of the seven best second-place finishers in European groups.

"We want to try and avoid the play-off situation," added the Liverpool captain who has won 106 caps.

"It is a safety net but the boys want to do it on Tuesday and if we can seal it in front of our supporters it would be absolutely fantastic."

Meanwhile, The Football Association has sold 18,000 tickets to Poland fans - double their entitlement - to prevent away fans from buying tickets among England supporters.

"I am happy to hear about so many Poles coming to the match," said Poland captain Jakub Blaszczykowski. "We want to entertain them and get a very good result at Wembley.

"Hopefully we will play well enough to send them back home smiling."

Poland held England to a 1-1 draw at Wembley in 1973 to stop Sir Alf Ramsey's team qualifying for the following year's World Cup.

"That game in 1973 has a very important place in our history," added Blaszczykowski. "People still talk about it now.

"It would be exciting to be part of history ourselves by getting a good result on Tuesday as well."