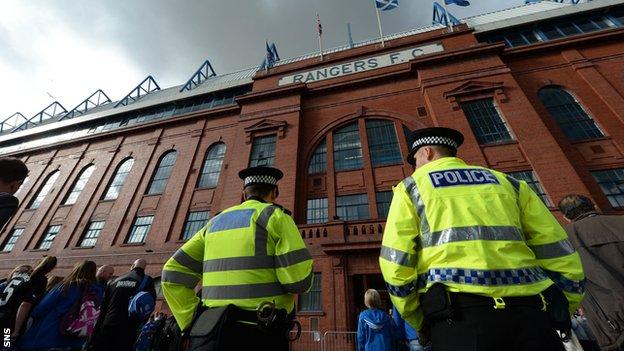 Rangers have been forced to postpone their 24 October annual meeting after shareholders seeking changes at board level won a court decision.

Lord Tyre granted an interim interdict at the Court of Session in Edinburgh, preventing the AGM from going ahead.

Rangers had said there was not enough time for four directors nominated by shareholders to be put up for election.

But the group said Rangers had broken the law by failing to ensure the motion was on the agenda.

It is the latest development in a battle for control of the Scottish League One leaders.

The board have placed themselves in a very difficult situation by failing to discharge their statutory obligations. They have committed an offence

The group wants Malcolm Murray, who was club chairman until April, Paul Murray, who was a director until last year, director of Loch Lomond Golf Club Scott Murdoch and Alex Wilson, a former HR director with BT, to be appointed to the board.

Paul Murray told BBC Scotland's Sportsound programme: "Today was all about shareholder democracy. We wanted to put in front of the shareholders, the fans and the other stakeholders of the club the ability to have a democratic vote at the AGM.

"We submitted four nominations on 27 September. Those have been shown today to have been perfectly valid legal notices.

"The club's board chose to ignore those notices and issue an AGM notice that is flawed and set a date of 24 October that is now having to be rearranged."

"I think both [chief executive] Craig Mather and [finance director] Brian Stockbridge have to seriously consider their positions tonight because I think they are untenable.

"The board chose to tie us up in all sorts of legal mechanisms that were reported today in court and we've been vindicated."

Richard Keen QC, representing the shareholder group, accused the club of engaging in "guerrilla warfare" in its battle to prevent a group of shareholders from joining the Ibrox board.

He told Lord Tyre the directors of the club had "committed an offence" by not informing other shareholders of the requisition.

"An offence has been committed by every member of this board," Keen said.

"The board have placed themselves in a very difficult situation by failing to discharge their statutory obligations. They have committed an offence.

"If I am right, the consequences of that must be visited upon them."

Mather and his fellow board members have been sued by the requisitioners.

The current Rangers board has so far blocked the attempts at change, claiming the application was not properly authenticated and that it did not arrive on time.

Keen claimed the signatures requested by the board had been offered "timeously" before adding: "These requests have been sent by the relevant companies and, on the face of it, there is no reason to doubt their validity."

However, Heriot Currie QC, representing the board of Rangers International Football Club, told Lord Tyre: "The petitioners have known since 12 September that they had to organise themselves for a shareholder meeting by no later than 30 October."

The Murrays, along with shareholders Ian Cormack, John Graham and Colin Howell, made requests in writing to Rangers International Football Club plc to give notice to members of the resolutions to appoint new directors at the AGM on 27 September.

They maintained they had enough support from institutional shareholders to take them over the key threshold of 5% of the total voting rights to allow such a move.

Currie said there was no obligation on the part of the company to circulate the resolutions and claimed documents and related information were supplied that at the very least raised "very significant doubt" over three of the backers of the move making valid requisitions.

Rangers must re-arrange their AGM to be held before the end of December and must give shareholders at least 21 days' notice.

They say they will fix a new date "as soon as possible" with the requisitioners' business included, but they have defended their decision to initially oppose the notices.

Following the Court of Session decision, Rangers issued a statement on their website: "The board of directors of the company received clear and firm advice from its solicitors and senior and junior counsel that on the face of documents provided by the petitioners, the notices had not been signed in a manner that was authorised and as a result the directors were obliged to seek further clarification from those shareholders.

"Every effort was made to engage with the petitioners on these issues. However, the petitioners chose to resolve the matter in court. In Lord Tyre's opinion, these irregularities did not invalidate the notices."